Palm Springs, CA – Feb. 9, 2011 – Coming off of their worst loss of the season, the Palm Springs Chill needed to rebound with a strong effort and get back into the win column.

On Wednesday they did just that against the Palm Desert Coyotes.

They jumped out to an early 2-0 lead in the third inning, when Alex Cowart’s 2-RBI single scored Chad Bisnette and Chris Round.  The Coyotes scored one run on an error in the fifth – their only score of the ballgame.

The Chill pitching staff dazzled, behind six solid innings from starter Sean Watson, two scoreless frames by reliever Chaz Leftridge, and a 1-2-3 ninth turned in by Cowart. The 2-1 victory brought them to within two games of the Coachella Valley Snowbirds in the CWL standings.

The Snowbirds were hoping that the third time would be the charm in Game Two against the Canada A’s.  In their two previous head-to-head matchups against the A’s, they lost by identical 7-0 scores – both times against Canada starter Taylor King.

King got the call once again for Canada. He threw five innings, striking out seven and issuing only one walk and four hits. His team gave him a 1-0 lead in the third, on a double by outfielder Darryl Stanfield and a sacrifice fly by James Decesare.

The bullpen, however, could not hold the lead. Tiffany Brooks hit the first batter she faced then gave up a two-run homerun to Snowbirds center fielder Takaaki Suetsugu. Brooks retired the side after that but the damage was done. Coachella Valley added four in the seventh, and staved off a Canada rally in the late innings. Masahisa Morita notched his first save, retiring the final two batters and stranding the A’s tying run at second base to preserve the 6-5 victory for starter Shota Kano.

Thursday is an instructional day. All teams resume action on Friday with a rematch between the Canada A’s (8-5) and the Coachella Valley Snowbirds (6-6-1) at 1 p.m., followed by the 5 p.m. game featuring the Palm Springs Chill (4-8-1) and the Palm Desert Coyotes (7-6).

Saturday is “Bark at the Park” day at Palm Springs Stadium. Fans are encouraged to bring their furry four-legged friends to enjoy the game with the family.

All games can be heard live on the California Winter League website, at www.CaliforniaWinterLeague.com. Saturday 1 p.m. games are simulcast on Newstalk 920 KPSI. 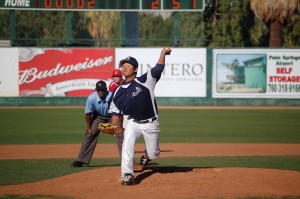 Starting Pitcher Shota Kano went 7 innings and earned the victory over the Canada A's on Wednesday.

The International Language of Baseball