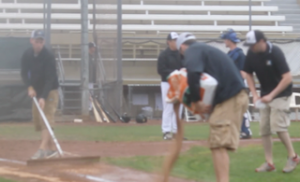 First Ever Rainout in CWL History

The morning contest began under soggy conditions but was eventually called in the top of the third inning as the Coachella Valley Snowbirds (5-0) led 1-0 over the British Columbia Bombers (2-3). Eric Bainer slapped a RBI single to plate Spenser Augustine for the contest’s only run. The statistics will still count despite there being no winner and loser.

The other two games, which featured the Palm Springs Chill (2-3) vs. the Oregon Lumber Jacks (3-2) and the Washington Bluesox (2-3) vs. the Palm Desert Coyotes (3-2) will not be played at a later date.

2013 CWL action will continue tomorrow at 9:00 a.m. as there will be a quadruple header. Three games will be played at Palm Springs Stadium and one game will take place at Palm Springs High School.