In game one of the day the Canada A’s (2-7) busted out the big bats, newly acquired Adam Conner went two for four with an RBI in his A’s debut.

The Palm Desert Coyotes (3-6) committed three straight errors in the bottom of the second inning that allowed the A’s to score two runs. 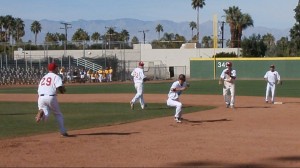 The battle for Palm Springs between the POWER and the Chill went the way of the POWER. The POWER (7-2) started slow allowing an early 2-0 lead to the Chill (3-5) but Taylor Gilliam led off the top of the fourth inning with a single.

Koby Clemens came to bat and moved Gilliam to second with a single of his own and then Marquis Riley drove in Gilliam from second base with an RBI single to make the score 2-1.

The POWER was not done offensively when in the top of the sixth they plated two runs, a pair of singles from Aritz Garcia and Taylor Gilliam led of the inning. Aritz Garcia scored on a sacrifice fly from the bat of Koby Clemens bringing the fifth RBI of the season for Clemens. The POWER would add 3 more runs to pull away for their sixth win in a row 6-3 on top of the Chill.

In the third game of the day the Snowbirds (8-1) rallied trailing by two runs to the British Columbia Bombers (3-5).

The Bombers took an early lead on a two-run home run by Maxx Garrett his first of the season.

In the fourth and fifth innings the Snowbirds used a sacrifice fly RBI from Eric Bainer and Michael Durham tallied an RBI triple. In the fifth inning, Relly Mercurio sacrificed a run home and the Snowbirds scored six unanswered runs to stun the Bombers 6-3.

BLUESOX AND SNOWBIRDS BOUNCE BACK, THE POWER CONTINUES TO SURGE