Game one of the day the Canada A’s (4-9) mounted a super human effort to come from behind to defeat the Palm Springs Chill (4-9).

Each team showed off their skills to scouts from the major leagues and ball clubs across the country. 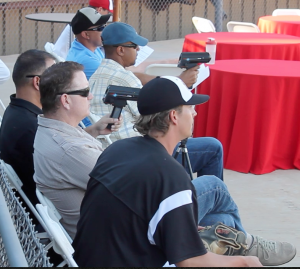 Cory Osborne drove home a pivotal RBI in the seventh inning on a double.

Mike Meaney finished his day in spectacular fashion going one for two with two RBI’s. The Canada A’s defeat the Palm Springs Chill, 9 to 6.

The Palm Desert Coyotes (5-8) got a much needed win over a team with a better record, the Palm Springs POWER (8-4-1).

Adrian Ibarra drove in an RBI in the fifth inning on a single, Anthony Amedei finished the day two for two with two singles.

The Coyotes pulled out all the stops; Alex Bello hit a key RBI single in the bottom of the sixth.

Bobby Hillier finished with an impressive day swinging the stick, three for three.

Ryan Levine continued the hot hitting with a two for three day tacking an RBI in the third and the Coyotes finished off the POWER 4-2.

The final game of the day featured the Coachella Valley Snowbirds (12-1) and the British Columbia Bombers (4-8).

Eric Bainer finished the day two for three with four RBI’s including a two RBI single in the second inning and a two RBI triple in the sixth.

The Snowbirds continue to dazzle with a 9-2 victory over the Bombers.