The A’s exploded for five runs in the fourth and fifth innings, Aaron Bauman knocked in a run on a sacrifice fly in the fourth inning.

Steven Perrotta finished his day with a bang, an RBI single in the fifth and the A’s down the Bombers 12-5.

In the matinee game between the Washington Bluesox (6-6-1) and the Palm Springs POWER (8-5-1) it was a heart stopper. 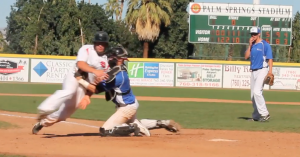 These two teams had already played a close game before with a 6-6 tie earlier in the season.

This game was neck and neck the entire seven innings, George Williams drove in an RBI on a single in the fifth.

Tillman Pugh stretched the Bluesox lead to five to one in the fourth inning with a two run home run.

The Bluesox bullpen stayed steady with Connor Murray notching his first save of the season in a 6-5 victory.

In the afternoon game, the Palm Springs Chill (5-8) and the Oregon Lumberjacks (7-6) participated in a slugfest.

Eleven hits for each team while the Chill converted twelve runs in a run-away 12-5.

Hiroshi Senda finished the day three for four with one RBI.