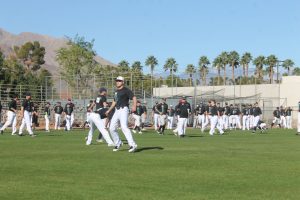 PALM SPRINGS, Calif. – Over 200 players from around the world gathered at Palm Springs Stadium on Tuesday morning to officially kickoff the 9th season of the California Winter League (CWL). Several countries are represented across the 10-team league for the 2018 campaign that include: Taiwan, South Korea, Canada and Australia.

Ultimately, the primary objective of the California Winter League is to provide players the necessary instruction and opportunity to continue their baseball careers as professionals. Over the course of a rigorous 28-day schedule, athletes are exposed to invaluable coaching from various organizations throughout the baseball landscape.

This season, the California Winter League welcomes coaches from Independent organizations like the Frontier, Can-Am, and Atlantic leagues. Scouts representing the Texas Rangers and Los Angeles Dodgers, among others, are also involved in helping players reach their potential.

Players were greeted Monday in Palm Springs with an itinerary and housing. After a long day of travel and getting accustomed to their surroundings, athletes arrived Tuesday ready to work.

Coaches and scouts prepared skill stations to overlook what this year’s talent pool has to offer. Ron Biga, who is the CWL’s pitching coordinator and manager of the Windy City ThunderBolts of the Frontier League, watched over the various right-handed and left-handed hurlers as they threw a 25-to-30-pitch bullpen session.

All the while, position players took swings in the three batting cages provided at the facility preparing for their workout. Infielders, outfielders and catchers all recorded a 60-yard-dash time open for evaluation.

Catchers showed off their technique and arm strength to scouts by completing the pop time drill. Elsewhere, position players fielded ground balls and threw to bases during infield-and-outfield workouts.

Wednesday holds another opportunity for players to showcase their skill set with individual workouts and organized practices. By the end of the day, each of the 200+ players will be assigned a team and games will begin at 8:30 am on Thursday.