Can-Am League Merges Into Frontier League, More Opportunities than Ever for CWL Players

PALM SPRINGS, Calif. – The Frontier League announced today that the league will join forces with the historic Can-Am League as five teams from the Can-Am League will merge into the Frontier League. The New Jersey Jackals, Quebec Capitales, Rockland Boulders, Sussex County Miners and Trois-Rivieres Aigles will play in the new Can-Am Division, with the Washington Wild Things and Lake Erie Crushers joining the division as well. The remaining seven teams, the Evansville Otters, Florence Freedom, Gateway Grizzlies, Joliet Slammers, Schaumburg Boomers, Southern Illinois Miners and the Windy City ThunderBolts will compete in the Frontier League’s other division. With 14 teams set to take the field in 2020 following the announcement, the Frontier League now becomes the largest league in all of Independent Professional Baseball.

Frontier League Commissioner Bill Lee, who will reprise his role once again for 2020, says “I am extremely excited and privileged to be able to make this announcement. These discussions have been ongoing for almost 2 years. The 2019 Frontier League/Can-Am League All-Star Game was the first major step in the Leagues working together. We believe this merger strengthens Independent Professional Baseball as a whole. I want to thank everyone from both Leagues that have worked so hard to make this happen.”

Kevin Winn, Executive Director of the Can-Am League says, “It has been my honor to be a part of this groundbreaking deal and I can’t thank all parties involved enough for getting us to this historic moment. I look forward to seeing where our newly formed alliance heads next and all the Independent Professional Baseball history that is yet to be written.”

“The growth of the Frontier League from 10 to 14 teams is exciting news for the California Winter League. This means that Frontier League teams will sign at least 28 CWL players in 2020. We are proud to continue to offer the best platform for players to begin or advance their professional careers,” said CWL General Manager Justin Reschke.

In addition to having representation from all 14 Frontier League teams present during the duration of the CWL’s month-long season, the CWL plans to include managers from the American Association, Atlantic League, United Shores Professional Baseball League, as well as scouts from several MLB organizations all of who will be looking to sign CWL players to professional contracts before spring training begins for their respective organizations. Additionally, the former Can-Am League teams will need to add several rookies to their rosters to meet Frontier League roster eligibility requirements. The Can-Am League had operated with a minimum of five (5) rookies being required for each team. The Frontier League increases that number to a minimum of twelve (12) rookies per roster, creating more opportunity for the rookie-heavy CWL to provide players. The Frontier League puts a heavy emphasis on younger, talented rookie players with the aim of advancing these players to MLB affiliated organizations.

The Frontier League is the oldest independent professional baseball league in the country. It began play in 1993. The League just completed its 27th consecutive season. In those 27 seasons, over 1000 players have been signed by MLB teams. 38 of those players have advanced to play in Major League Baseball.

The Can-Am League’s predecessor was the Northeast League that began play in 1995. Prior to the 2005 season, the Can-Am League name was officially adopted. During those years, more than 135 players have signed contracts with MLB clubs and 16 have advanced to play in Major League Baseball.

“Each year independent baseball is becoming a better and better path to the Major Leagues,” Reschke said. He continued “With the MLB draft being cut from 50 rounds to 40 rounds within the last several years, more and more players need to find alternate routes to affiliated baseball. Independent baseball provides these routes and allows players to develop while playing professionally. Over half of MLB organizations have dedicated independent league scouts now, so more independent league players are being signed and promoted to affiliated baseball than ever before. The Frontier League puts a strong focus on elevating players and that’s why the CWL is excited to learn of their expansion and to help them find and sign talented CWL players who can reach that next level from the Frontier League.”

2020 will be the 28th season for the Frontier League. All teams will play a 96-game schedule. Opening Day will be Thursday, May 14th. The regular season will conclude on Sunday, September 6th. The full 2020 Schedule will be released on Monday, October 21st.

The 11th season of the California Winter League gets underway when players report to Palm Springs, CA on January 20th. Games will begin January 23rd at historic Palm Springs Stadium, the former spring training home of the Los Angeles Angels, and will continue through February 16th. Players depart Palm Springs on February 17th. Over the previous 10 seasons, the CWL has helped over 700 players receive contract offers to begin or advance their professional playing careers. Registration is currently open for players looking to play in the CWL in 2020. 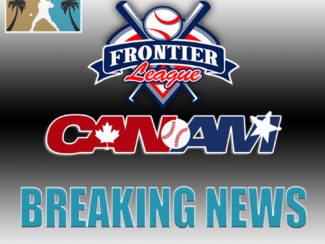