Palm Springs, CA-January, 25 2011- Just two days after an offensive explosion, the Palm Desert Coyotes proved to the rest of the California Winter League they had the pitching staff to win low-scoring affairs as well. 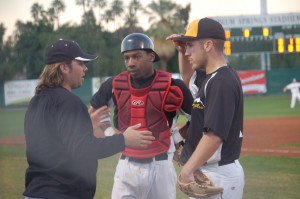 Joe Scumaci tossed six shutout innings for the Palm Desert Coyotes in their 5-0 win over the Palm Springs Chill Jan. 25, 2011.

Coyotes pitcher Joe Scumaci tossed a gem of a game, striking out nine batters and surrendering only one hit over six scoreless innings of work to improve Palm Desert to 2-1 on the season with a 5-0 win over the Palm Springs Chill.

The Coyotes were not only sound defensively behind the efforts of Scumaci, but they were also efficient on offense scoring five runs on only eight hits.

The Chill was plagued defensively by errors (two) and miscues, as the Coyotes scored three of their five runs with two outs.

In the day game, the Coachella Valley Snowbirds remained undefeated (3-0) as they topped the Canada A’s, 3-2.

The A’s jumped out to an early lead, scoring in the bottom of the first inning to go up 1-0.  But they would fail to score for the rest of the game as Snowbirds’ pitcher Tukasa Kozono settled in after the first inning.

Coachella Valley responded immediately with three runs in the top of the second inning. Takashi Aoki and Jeff Vires took advantage of walks and Shingo Ono singled to load the bases for the Snowbirds. Brock Whiteman then came up and delivered with two outs driving in two runs on a single. Jonathan Johnston followed by driving in another run to wrap up the scoring for the Snowbirds.

Robbie Nelson, Shota Kano and Takinori Koshigoe contributed to the defensive excellence for the Snowbirds. Nelson threw the fifth and sixth innings, striking out three while allowing only one hit.  Koshigoe picked up the save despite giving up a run in the bottom of the eighth.

California Winter League action continues January 26 with a 10 a.m. showdown between the Chill and the A’s, followed by a 1 p.m. match-up between the league leading Coachella Valley Snowbirds and the second-place Palm Desert Coyotes.