Palm Springs, CA-January, 26 2011- Day four of action in the California Winter League saw the Chill get their first win of the season in the early game, and the Snowbirds get their first loss in the afternoon game. 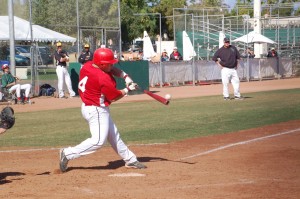 Game one featured the Palm Springs Chill and the Canada A’s. This one was a nail biter from the first pitch through the last out as no team ever lead by more than one run at the end of an inning.

The A’s got off to an early 1-0 lead in the bottom second inning but the Chill immediately responded with a run of their own in the top of the third after Alex Cowart hit an RBI triple.

Both teams matched zeros until the top of the fifth when the Chill got all of the scoring they would need. With a man on first, Mike Olsen hit a double off the right field wall giving the Chill a one run lead. Olsen then went on to score the Chill’s third run on an error by the A’s. That run proved to be the winning run as the A’s got one back with no outs in their half of the fifth. That is when Chaz Leftridge entered the ball game for the Chill.

The one run lead was all Leftridge would need as he threw 3 innings of scoreless ball to close out the game for the Chill and gave them their first win of the season.

Game two was a battle between the first place Cochella Valley Snowbirds (3-0) and the second place Palm Desert Coyotes (2-1).

The Snowbirds put up a quick two runs in the bottom of the first but they would be stymied by Coyote pitching the rest of the way.

One of the keys to the Snowbirds success in the early part of the season has been their defense but that was not the case Wednesday afternoon. The Snowbirds struggled in the field committing multiple errors.

The Coyotes capitalized and scored runs in the second, third, and fourth innings. They were lead by right fielder David Holcombe’s two RBI day. At the end of four, the Coyotes had a 6-2 lead.

The Coyote pitching was dominant as they did not give up an earned run all afternoon. Starting Pitcher James Janclaes went the first four innings and then Charles Williams, Brian Fowler, and James LoPresti each worked an inning of scoreless relief to give the Palm Desert Coyotes a 6-2 victory.