Solid Pitching Leads the Way in Game Action on Friday

Palm Springs, CA—January 28, 2011—In a nightcap filled with flashy plays and the first home run of the young California Winter League season, the Palm Springs Chill and the Coachella Valley Snowbirds finished the game in a 2-2 tie.

The Snowbirds jumped out to an early 1-0 lead in the second inning, on catcher Jonathon Johnston’s RBI single, but surrendered the lead in the third after a bases loaded walk to Chill second baseman Nick Spears.

In the fourth, however, the Snowbirds recaptured the lead, thanks once more to Johnston. After a Drew Boyd walk, Johnston put a fastball deep off the wall in left center field for an RBI triple. The Chill answered the call in the bottom of the fifth, as Scott Clement took an up and in fastball deep over the left-field wall, tying the game 2-2.

The Chill threatened in the bottom of the sixth, but squandered a fantastic scoring opportunity. After two consecutive singles to lead off the inning, Jake Taylor singled to right, but the runner on second, Chris Round, was thrown out at home after trying to score on the single. The next batter lined out to the pitcher, who promptly doubled off the baserunner on first, ending the Chill scoring threat.

No baserunners advanced past first base for the remainder of the game, thanks largely to Johnston, who ended the game by throwing out a Chill runner at second attempting to advance on a pitch in the dirt.

Johnston led the Snowbirds at the plate, as he went 2-3 and accounted for both Snowbird RBI. Shortstop Jeff Vires also collected two hits for the Snowbirds.

In the morning game, the Canada A’s bested the Palm Desert Coyote’s 4-3 on a Darrell Stanfield walk-off single.

The A’s were out-hit 10 to three, but were able to capitalize on late in the game opportunities. After strikeout to lead off the bottom of the ninth, Drew Taddia walked and advanced to second on a Brian Bistagne single. A wild pitch and a single later, the A’s celebrated their third win of the season in dramatic fashion.

Harry Williams picked up the win for Canada, throwing a scoreless top of the ninth inning. Kevin Pigott, the A’s starter, tossed three innings of one run ball, striking out three. Stanfield paced the A’s offensively going 2-3 with the game-winning single.

For the Coyotes, DH Chris Fratini went 3-4 with two doubles and a RBI. 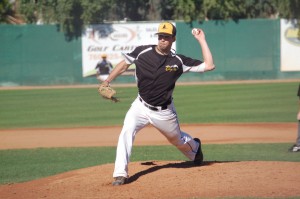 California Winter League action resumes Saturday with a double header. At 10:00, the Palm Desert Coyotes take on the Coachella Valley Snowbirds, and at 1:00, the Canada A’s play the Palm Springs Chill.

A Difference of Night and Day