Jordan Drake: A Tale of Perseverance

It’s not always easy to set a goal, almost reach it and then get turned away.

It’s even more difficult when that goal is being a professional baseball player and one gets drafted out of high school, only to get cut by the team that gave that chance.

“Right now, I’m just focusing on being a catcher,” Drake said after a recent Coyotes victory. “I’m trying to be a more defensive catcher because some (scouts) will look at you, and if your bat’s not there, being a good defensive catcher will take you a long way.”

Drake, who was drafted by the Los Angeles Angels in the 23rd round of the 2009 MLB draft, played his first two years of high school baseball at Wakeland High in Texas.

But his father Earl moved the family to Southern California before Drake’s junior year of high school.

Drake enrolled at Murietta Valley High School and started to play baseball for his new school. But Jordan got cut from the team and didn’t play for the rest of his junior season.

Set on proving himself as a senior at Murietta Valley, Drake went out for the baseball team only to be axed again from the team’s roster.

“It was a very humbling experience for Jordan,” Earl said. “I’ve always taught him, though, that you’ve got to live through adversity.”

Drake immediately transferred to another school where he could play baseball and wound up at Lake Elsinore High.

At Lake Elsinore, Drake was a star in his final year of high school. He garnered a .412 batting average with a pair of home runs and 17 RBIs in 25 games.

Drake also was a nightmare for opponents on the base-paths, stealing 26 bases and getting caught just three times.

Drake then landed his shot to play at the next level out of high school after the Angels spent a draft pick on him.

There was, however, a catch.

Drake, a natural catcher, was drafted as an outfielder because of his arm strength and his lightning-quick speed.

“I’ve been a catcher my whole life. It runs in my blood,” he said.

Playing for the Angels’ Arizona League affiliate, Drake played in 10 games as a left fielder, scoring a pair of runs on two hits with a stolen base.

After about 90 days, though, Drake was again looking for a new team.

“Outfield was cool, but catching is where my heart and soul is really at,” he said

A year later, he finds himself in Palm Springs in the California Winter League.

Starting in seven of the Coyotes’ first 11 games — and back at catcher — Drake has continued his relentless pursuit of getting back to the highest level of the game. He has a double and four RBIs and has scored five runs.

“I’m trying to get back to the next level,” he said flashing a hungry, confident smile. “I was already there and I’m trying to go back.” 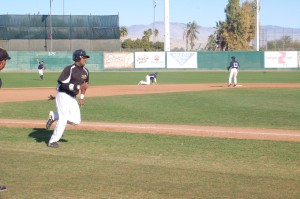 Jordan Drake scores a run against the Coachella Valley Snowbirds on Jan. 25, 2011 at Palm Springs Stadium in Palm Springs, CA.

A Chill in the Winter Breeze