The Coachella Valley Snowbirds bested the Canada A’s 11-8 in the afternoon contest, a game which saw a combined total of 31 hits.

After the Snowbirds took a 7-0 lead in the top of the third, the A’s responded with three of their own in the bottom half of the inning. A Keith Castillo three-run homer tied the game at seven in the fourth, but the Snowbird offensive onslaught proved too much, as five Snowbirds finished with multi-hit games.

The nightcap between the Palm Desert Coyotes and Palm Springs Chill reversed the day’s offensive trend, with the Coyotes picking up the 8-1 victory.

Coyote starter James Janclaes carried a no-hitter into the fifth inning, and only surrendered one run and three hits through seven innings of work. Janclaes stellar outing included seven strikeouts, as only five Chill runners reached base.

The Coyotes struck first blood in the top of the third, scoring three runs on a two RBI single by Marcus Dennistown and an RBI single from Andrew Martirano.

David Holcombe, who was 3-4 with a triple and an RBI, led Palm Desert offensively.

Come join us at Palm Springs stadium Saturday, when all four teams will be in action. The Palm Springs Chill and Coachella Valley Snowbirds square off at 10 am, and the Canada A’s host the Palm Desert Coyotes at 1PM. The afternoon ballgame is “Bark at the Park Day,” so be sure to bring your canines out to the ballpark! 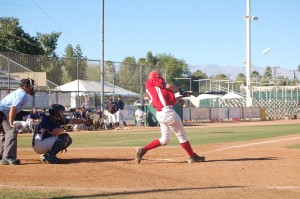 Keith Castillo follows through on his fourth inning home-run

The International Language of Baseball

With Playoffs a Week Away, Teams are Hungry Like the “Woof”