Persistence Pays off for Pitcher LoPresti

Baseball has always been a constant in James LoPresti’s life. So much so, that it’s rendered other aspects of his life quite inconstant.

LoPresti played at three different colleges and for three different independent professional teams in the span of five years, before arriving in Palm Springs this winter to showcase himself in the California Winter League.

“I’ll do anything, whatever I can, to continue to play baseball,” said LoPresti.

LoPresti, however, was dismissed from the team his senior season for throwing a party on Halloween.

“I was going to give up on baseball for a while,” said LoPresti. “Then around February or March [2010] I started wanting to throw again.”

LoPresti did throw again—at an independent tryout—and threw well enough to receive a contract offer with Schaumberg (IL) Flyers of the Northern League.

After throwing only 2/3 of an inning through his first month in Schaumberg, LoPresti was released, but signed a new contract with the Calgary Vipers of the professional Golden Baseball League.

LoPresti’s tenure with Calgary was also short-lived, as he was released just before the playoffs to clear a roster spot for none other than Mac Suzuki, California Winter League pitching instructor and former major-leaguer.

“I struggled with it in the beginning,” said LoPresti of bouncing around teams. “I had a 17-hour bus ride on my birthday and I questioned, do I really want to do this?”

After leaving Calgary, LoPresti was picked up by the Yuma Scorpions also of the Golden League, his third team in his first professional season. There he experienced his greatest professional success, going 0-1 with a 3.65 ERA and 8 strikeouts through 12.1 innings.

“I stuck through it and realized once you’re playing on the field and not dealing with the business, it’s pretty fun,” LoPresti said.

LoPresti has been impressive thus far in his quest for a 2011 contract. Through 15 innings of work, he boasts a 1.20 ERA and has 11 strikeouts as the closer for California Winter League’s Palm Desert Coyotes.

Ironically, LoPresti credits Suzuki for his early success. Suzuki has helped LoPresti—a starter by trade—with his transition to relief pitching as well as with the improvement of his slider.

“He’s [Suzuki] definitely helping a lot,” said LoPresti. It’s kind of weird that I was released for him, but now he’s the one trying to get me to the next level.”

As LoPresti knows best, that next level can be elusive. Nevertheless, he still dreams of one day playing Major League affiliated baseball.

“That’s still the long-term goal,” said LoPresti. “I’ve just go to work and keep working, and hopefully someone sees me at the right time. 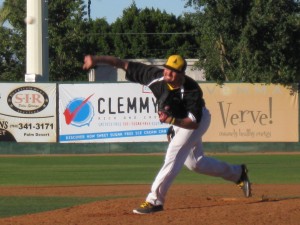 With Playoffs a Week Away, Teams are Hungry Like the “Woof”