In the afternoon matchup, the Palm Desert Coyotes pounded the Coachella Valley Snowbirds, 20-7.

The Coyotes scored early and often, plating six in the bottom of the first, and three more in the second, to take a commanding 9-0 lead.

After scoring their first run in the fourth inning, the Snowbirds added three more in the sixth to cut the lead to 9-4.  Yet the Coyotes never looked back adding four runs in the seventh and seven in the eighth, picking up the eventual 20-7 victory.

Wes White Jr. led the Coyote hit brigade, going 2-2 with three runs scored. Andrew Martirano added three runs of his own, along with a double and two RBI.

Snowbird catcher Brock Whiteman had a stellar day at the plate, going 2-3 with two doubles and three RBI.

The teams went back and forth for the majority of the game, but the A’s took a 15-12 lead into the top of the ninth inning.

With two outs in the top of the ninth, the Chill drew the lead to two runs after a walk, base-hit and hit batter. After a pitching change, a passed ball cut the score to 15-13 and moved the tying run to second base.

Yet after a Blaise Sylvester walk loaded the bases, the Chill failed to capitalize, as David McChesney flew out to shallow right field ending the scoring threat and the game.

A sixth inning Jake Taylor grand slam highlighted the Chill offensive attack. Taylor was 2-2 with five RBI on the day.

Starter Kevin Pigott went six innings for Canada, acquiring the win and improving his record to 2-3 on the season.

With the win, Canada clinches the #1 seed and wins the regular season title. The A’s will take on the Chill in the first-round of the playoffs Friday, and the #2 seed Coyotes will take on the #3 seed Snowbirds.

All four teams are in action for the last day of regular season play, Wednesday. The Chill take on the Snowbirds at 10:00 am, and the A’s take on the Coyote’s at 1:00. Come join us for all the action at Palm Springs Stadium, 1901 E. Baristo Rd. For tickets and more information, go online to californiawinterleague.com. 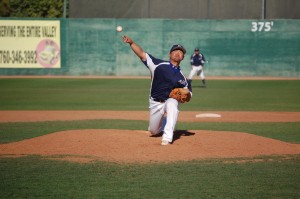 Tukasa Kozono pitched three scoreless innings of relief for the Snowbirds, but it wasn't enough as the Coyote's won 20-7