Around the World in 80 Games

In baseball, the batter’s objective is to make it home safely.

He first played for the Palm Springs Chill in 2008. “Playing for Gary Templeton (former Major League Baseball player and Chill manager) and being around so many professional teachers was a great learning experience,” Taddia said.

After calling the Coachella Valley his home that winter, Taddia went on to play for the Bay Area Toros of the now-defunct Continental League in Texas. While surfing the internet he learned about the Sunburst League in Canada and decided to try out for a team that summer. He made it with the Red Deer Stags in Alberta.

Taddia enjoyed playing ball in his native country. “It was good competition. The league had games during the week and tournaments on the weekends,” he said. “The attendance was strong for those weekend games.”

One of Taddia’s teammates in Canada spoke about a baseball league that played during the winter and encouraged him to go along for the adventure. He accepted the invitation, and his bags were packed for the next stop in his global baseball journey: Australia.

Taddia notes that Australians were very welcoming. Outside of the adjustment to the local slang, accents and large-sized currency, he found driving on the opposite side of the road to be the only challenge.

“There’s not a big difference in the game down there, except that the infields are completely grass. Just a little bit of dirt right around the bases,” Taddia said. Flooding often occurs in areas of Australia, so the grass infield is essential in keeping the field in playable condition. On the contrary, other parts of the country endure extreme heat which made the outfield grass seem more like playing on dirt.

Another notable difference was the limited amount of instruction. “The players in Australia have lots of raw talent, but they don’t have the opportunity to learn from managers and coaches with a higher level of professional experience like most do in the United States.”

According to Taddia, it is probably because cricket, rugby and soccer are more popular in Australia. “The guys would watch rugby on the clubhouse television. I didn’t understand it at first, but once they explained the rules to me it made it more interesting.”

The biggest culture shock, however, was still forthcoming. A player in Australia had shared stories about playing baseball in Germany, so Taddia made the Hamburg Knights his next team. He discovered the European lifestyle to be quite different.

“Where I was playing in Australia (an hour south of Brisbaine, Queensland) it was very laid back. Guys were walking around the mall or grocery store wearing no shirt and no shoes – just shorts. But in Germany, it is very materialistic. People like to get dressed up, even to go to the ballpark. It’s all about the designer labels.”

The way of life was different in Germany, too. Taddia says it is common for dinner to be a four hour event. “Germany is very family-oriented. You sit down and have drinks before the meal. Then after a while, you share an appetizer. After the meal you have a liqueur or coffee. No one rushes you. Everyone acts like they have nowhere else to go.”

That is, unless they were outside. Taddia was amazed at how quick the pace was in Hamburg.  Likening it to New York City, he said that people seemed to walk fast and drive faster.

“The transportation system was great. They have public bike stations. You can rent a bike from one place and return it at another station across town. People dressed in business suits were riding bicycles, too. Parking is a big problem in Hamburg, but the U-Bahn (the subway system) would get you where you needed to go,” Taddia said.

Taddia also said it was obvious by looking at the stadiums that some sports clubs in Germany were better funded than others. The Hamburg Knights, which he played for, was part of a larger club that included teams in other sports.

One of those other sports in particular overshadowed baseball. “Soccer is big in Germany,” Taddia said. “It’s like hockey in Canada. The World Cup was going on while I was there. There were TV’s set up for people to watch in the park and on the streets. They were honking their horns. There were flags everywhere. It was crazy.”

But no matter where in the world he is or how hectic life seems, Taddia has one passion that he carries with him each day – a regimen of dynamic stretching that prepares him physically for the day ahead. It is something that he learned from a coach early in his playing career and has taught other teammates along the way.

In fact, Taddia became a personal trainer and started his own company. And via internet telecommunication he is able to share programs and stay up to date with his clients wherever he travels. “I want to inspire people. I want them to realize that they can continue to reach their goals wherever they are.”

Taddia planned a return to Australia this winter with an offer to play in Toowoomba, but he experienced problems getting the travel arrangements secured. That may have been a blessing, as the area was hit with severe flooding last month. Instead, he returned to Palm Springs to enjoy the competition and instruction of the California Winter League.

A number of players in the CWL are here for the first time from Japan. He had fun introducing them to pine tar, which is used to achieve a better grip on the bat (a spray substance is widely used in Japan). “You can learn a lot from other players,” Taddia said. “Players connect by watching T.V. together or telling jokes in the clubhouse. When you don’t speak the same language, it can be tough. Sometimes you take little things for granted.”

Could Japan be Taddia’s next stop?

“I’d be all for it,” he said. “But I love playing in the United States. There’s nothing like it.” 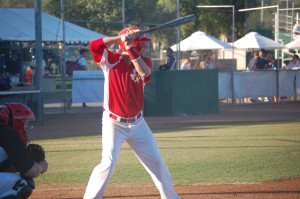