The California Winter League (CWL) is designed to help baseball players chase their dream of getting signed by a major league organization.  And while the goal is to get signed, the odds of making a big league roster are infinitesimal.  That is why two young men are preparing for life after baseball, while continuing to chase their dream.

Blaise Sylvester of the Palm Springs Chill and Nate Wilson-Traistman of the Palm Desert Coyotes are also interns with the CWL.  When their teammates show up an hour before their 5pm game, Blaise and Nate have already been at the stadium for six hours learning the ins and outs of working for a baseball team.

“My First objective is to get signed by an independent or minor league team,” Sylvester said.  Sylvester starred at Millikin University but did not get much exposure playing at the Division III School.  If that does not work out, Sylvester wants to pursue a career in ticket sales or marketing.  “I am very outgoing and personable and this internship has helped me realize what the future might bring after baseball.”

Wilson-Traistman also played for a Division III school, Macalester College, where he majored in English.  He plans on combining his baseball playing experience with his degree to become a baseball writer. “I’ve done a lot of sports writing but never baseball because I’ve always been playing” said Wilson-Traistman.  For the first time, he has had the opportunity to do both and he has excelled in both areas.  As a baseball player, he finished the regular season ranked second in RBI’s and first in triples.  As a writer, he has had two articles published in the Desert Sun. 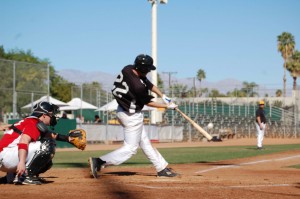 Both of these young men have been able to translate success on the diamond into success in the office. “It’s easy knowing that when I get out of bed every day to go to work, I’m also going to be playing baseball” said Sylvester.  Wilson-Traistman added that “It’s really hard for me to brush off whatever emotions or frustration I’m feeling after a game but I’ve been forced to leave the game on the field and move on immediately, which has been good for me”.

No matter what happens in the playing careers of these two; they both know that they want to be involved in the game they love.  As Wilson-Traistman put it, “At least life after baseball still has baseball in it”.

Around the World in 80 Games

A’s, Coyotes to Square Off in Championship Game