It turns out even a five-time Major League All-Star knows a thing or two about failure. Just ask the California Winter League’s Russell Dixon.

When the Houston Astros released Dixon, merely two days before the end of Spring Training 2010, it was personal friend and former Astro great Lance Berkman who helped Dixon deal with the disappointment.

“One thing he does such a good job of, and something he helped me with, is realizing that success in baseball is so relative,” said Dixon, who as a child was babysat by Berkman’s wife. “You can do everything right and still have nothing to show for it.”

Such was the case for Dixon, a highly touted 7th-round draft pick out of Auburn University whose third season in the Astros system began as his best. In 2009 with Class A Tri-City, Dixon was batting .302 before being promoted to High A Lexington. There, Dixon struggled, batting only .167 in 162 at-bats.

“I was hitting the ball hard, but just hitting everything right at people,” said Dixon of his 2009 stint with Lexington. “Things kind of started to snowball.”

After a front office regime change, the Astros decided to let Dixon go. Houston felt it was more beneficial for Dixon—then 24-years old—and the franchise, to give him an opportunity to begin anew with another organization. 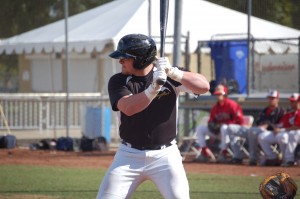 “It was frustrating, no doubt,” said Dixon. “I can sit there and make excuses, but the Astros gave me a chance and I’ll always be thankful for that.”

One year later and still in search of a contract, Dixon has traveled to Palm Springs to showcase his talents in the CWL. Despite the transition, Dixon has maintained an even keel, something he picked up from Berkman, workout partner and fellow Houston native.

“He’s not too big or too good for anybody,” said Dixon of Berkman. “That’s the biggest thing I’ve learned from him. Just to have fun, trust in your ability and keep going.”

Dixon has kept going, and as one of the most experienced players in the CWL, has found himself doling out some wisdom of his own.

“I can’t remember the last time I had this much fun playing,” said Dixon of his time in the CWL. “There’s nothing I love more than talking baseball and helping guys get better. I like being the salty veteran of the bunch.”

With the help of Berkman and without the pressure of being “the hometown guy,” Dixon has embraced his quest to get back into Major League affiliated baseball. That quest will likely begin in the American Association, where teams have shown extensive interest in Dixon.

“Now, wherever I end up landing, I’ll be able to just go play,” said Dixon. “I can have success without having to be the guy or the face of the franchise. The timing [of his release] may not have been great, but it’s been the best thing for me.”