The Coachella Valley Snowbirds (3-0) chopped down the Oregon Lumber Jacks (1-2) 9-5 to open the third day of the California Winter League at Palm Springs Stadium.

Relly Mercurio blasted a homer in the fourth inning and finished 2-for-3 with two RBI and two runs scored. Eric Bainer added a home run in the sixth.

The Snowbirds sandwiched a five-run fifth inning in between the two majestic big flies. Trailing 4-3 in the bottom of the fifth, Robert Benedict, Andrew Sterling, Matt Chavez, Zach Brosten and Relly Mercurio all scored. 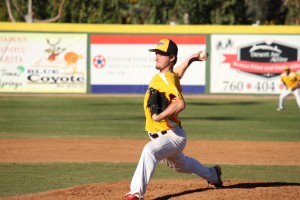 The Washington Bluesox (2-1) overcame an early three-run deficit to beat the British Columbia Bombers (0-3) 6-3 in the second contest of the afternoon.

George Williams came off the bench in the fifth inning and ripped the game-winning homer, which was the third round-tripper in the California Winter League in consecutive days. Cody Reiger added a two RBI double.

Edward Jamerson struck out one in one inning and registered the victory.

In the final game of the tripleheader, the Palm Desert Coyotes (2-1) cooled off the previously unbeaten Palm Springs Chill (2-1) 6-5 with a three-run sixth inning.

Dustin Smith connected on the game-winning RBI and finished 2-for-3 with two RBI. Sean Jarrett went 3-for-3 and scored twice.

Bobby Hillier slammed the door shut, recording two strikeouts in two innings to get the win.