BLUESOX AND SNOWBIRDS BOUNCE BACK, THE POWER CONTINUES TO SURGE

The day began with a pitching duel in the desert between the Palm Springs POWER (6-2) and the Oregon Lumberjacks (4-4). Taylor Gilliam led the POWER with a double that drove in an RBI in the second inning. The POWER used three pitchers, loaned Chill hurler Masahisa Morita, POWER starter Nathan O’Bryan and infielder Adrian Ibarra to limit the Lumberjacks to five hits in a 3-2 victory. 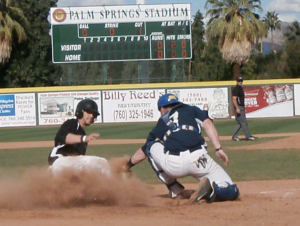 The Washington Bluesox (4-4) set off some fireworks, Damien Broadnax went 2-for-3 with an RBI single, Ryan McMillin drove home an RBI in the first. Designated hitter Josh Riley had a two RBI day and Joey Johnson added an RBI with a sacrifice fly in the fourth. Justin Vasques broke it open in the sixth with a two-run home run in the 8-2 beat down of the A’s (1-7).