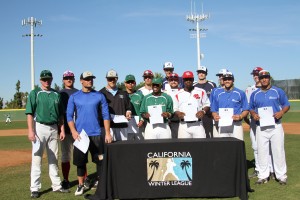 The morning game between the Palm Springs Chill (4-5) and the Canada A’s (2-8) lit up the scoreboard.

17 runs combined between the two teams highlighted by an Alex Heumann game winning RBI single in the bottom of the sixth inning. Chill defeated the A’s 9-8.

Game two, was a back and forth competition between the Washington Bluesox (4-4-1) and the Palm Springs POWER (7-2-1), Ryan Van Amburg came in as a pinch hitter and finished one for two with two RBI’s.

Koby Clemens parked his second home run of the season over the left field wall scoring two for the POWER all in the top of the seventh inning giving the POWER a six to three lead.

The Bluesox came to bat in the bottom of the seventh and knocked home three runs tying the game to secure the first tie of the season in the California Winter League, 6-6 final.

In the final game of the day, the Oregon Lumberjacks (5-4) exploded in the fourth inning with seven runs that included a two run home run by Zach Peek.

The 19 signings are the most in the first wave to sign professional contracts in California Winter League history, some of these players may sign with other MLB organizations along with other players that have yet to sign spring training invitations with these and other pro teams.