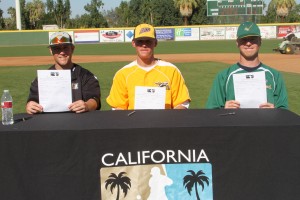 Game one of the day, the Palm Springs Chill (5-9) faced the Coachella Valley Snowbirds (13-1).

Ayumi Nakamura led the Chill swinging the bat finishing his day three for four with an RBI.

Birds pitcher Wacy Sorrenson continues to impress with seven wins and no losses.

Michael Durham added two RBI’s of his own to the RBI party and the Snowbirds roll to win their seventh game in a row.

Game two between the British Columbia Bombers (5-9) and the Palm Desert Coyotes (5-9) was a nail biter.

Scott Blanchette went two for three with a double and an RBI.

William Brown drove in two RBI’s in the top of the seventh and three total RBI’s for the day.

The Coyotes took a four run lead into the seventh inning. A lead that was generated by a sacrifice fly RBI by Sean Jarrett in the third and an RBI double by Trevor Willis in the sixth.

The final game of the day featured the Washington Bluesox (7-6-1) and the Oregon Lumberjacks (7-7).

For the Lumberjacks, Anthony DeSomma went two for two with a two RBI double.

The Bluesox contine to gell with a 14-4 win over the Jacks.