The Palm Springs Chill (6-9) batted around the lineup and scored four runs in the sixth inning to break a 5-5 tie as they defeated the British Columbia Bombers (5-10) 9-5. 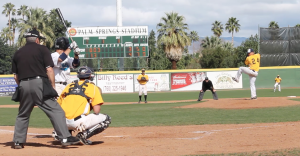 Victor Torres had the game-winning RBI.

Matt Thompson went 2-for-3 with one RBI and scored once in a losing effort.

REGULAR SEASON ENDS WITH A BANG!