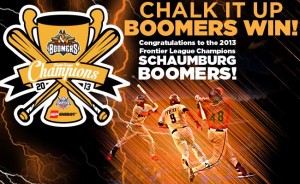 Two members of the 2013 CWL alumni won the Frontier League championship as members of the Schaumburg Boomers. Outfielder Bobby Martin, who signed with the Boomers during the 2013 CWL season, appeared in 62 games for Schaumburg this season. Outfielder Justin Vasquez, originally signed by the Frontier Grays out of the CWL, joined the Boomers in mid season and hit .333 for them while being an impact player down the stretch and in the playoffs. In the final game of the Frontier League championship, Vasquez went 1 for 4 and scored the go-ahead run in the contest after hitting a double.

Schaumburg manager Jamie Bennett had the opportunity to see and coach both Bobby Martin and Justin Vasquez during the 2013 CWL season, no doubt influencing his decision to make both players a part of his championship-winning club. Bennett will return to the CWL in 2014 in hopes of discovering players like Martin and Vasquez who can add a spark to his lineup as he and the Boomers aim to repeat as Frontier League champions.