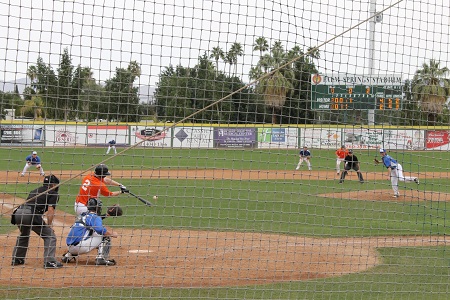 In the morning game at Palm Springs High School the Canada A’s fell eight to three to the Coachella Valley Snowbirds. The Canada A’s (1-1) who slugged their way to victory last night had no offense after the first inning and struggled mightily with their pitching.

The first inning started off with fireworks as in the top half Canada A’s catcher Kyle Clifton supplied the offense with a three run home run that would be it for the A’s offense. The three run lead for the A’s did not last long as the Snowbirds sent 9 to the plate in the bottom of the inning scoring three of their own.

The issue for the A’s was the pitching as starter Matt Vucovich struggled with his control from the outset. Vucovich issued four walks, hit four batters and surrendered four runs all of which were earned. The Snowbirds (1-0-1) continued to tack on runs while their pitching allowed no more runs after the first inning.

Chill hold on for first win over the Coyotes

In the exciting conclusion to the double header at Palm Springs High School today the Palm Springs Chill (1-0-1) were able to hold on off the Palm Desert Coyotes (0-2) for their first win of the season.

The Chill, who are quickly gaining a reputation for their aggression on the base paths stole five bases on the Coyotes. The biggest hit however was a home run by catcher Seth Spivak who led off the fourth with a clout to Right Center field. The fourth would prove to be biggest inning for the Chill who tallied three in the inning.

Isiah Washington hit a leadoff double for the Bluesox in the 1st inning and was driven in on Paul Rambaud’s double.  Nick Crouse drove in Chris LaPenna later in the inning to put the Bluesox up 2-0.

The lead would hold until the bottom of the 3rd when Brian Wuest singled in Pete Straka to bring the Bootleggers within one.  Bradley Dierolf singled in the 4th, driving home Jonathan Perea and tying the game at 2 apiece.

The teams exchanged runs in the 5th inning and the Bluesox would add two more in the top of the 6th to go up 6-3.  The Bootleggers chipped away in the bottom half to pull within 6-4.  In the bottom of the 7th Bluesox reliever Isiah Bell was unable to protect the lead as Hunter Ridge tied the game with a 2 RBI double.  The managers mutually agreed to play an 8th inning, which went scoreless and resulted in a tie.

The Midwest Haymakers (2-0-0) were comeback winners yet again as they defeated the British Columbia Bombers (0-2-0) 5-to-4 in game two on the second day of the 2014 California Winter League season.

The Haymakers offensively were driven by Brian White who went 1-for-2 with the big game tying hit in the bottom of the seventh scoring Kyle Peterson from second base.  A few batters later Anthony Mele drew a bases loaded walk to give the Haymakers their second straight win and now makes it back-to-back walk wins to start the 2014 season.

The Haymakers were benefited by a strong pitching performance from lefty Jesse Holiday who went four innings allowing two runs on four hits while striking out seven.

The Bombers were led offensively by shortstop Ayumi Nakamura who went 2-for-3 with a walk while swiping three bags.