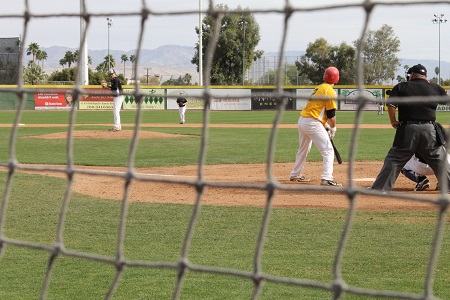 The Palm Springs Chill behind a stand out performance by MitsuoNakammura were victorious over the still winless Oregon Lumberjacks 8 to 5. Nakammura threw two perfect innings on his way to striking out three.

The Chill continue to run at will on their opponents racking up an additional four stolen bases in their win. Catcher Devon DeYoung led the charge offensively with a 2 for 3 afternoon to go with 2 RBI and 2 runs scored. DeYoung was matched offensively by first baseman Kenta Nishii who led the Chill with three hits.

The Lumberjacks fell behind early and were never able to catch up. Keagan Hopkins was hit frequently in his two innings allowing six hits and walking one on his way to surrendering four runs three of which were earned. A late comeback was mustered by late substitution Nick Schulz who in his two at bats collected two hits one a double and coming around to score in the bottom of the seventh.

Trailing by two runs in the bottom of the 7th, the Coyotes found their backs against the wall, but fought back to earn an 8-7 win over the visiting Bombers.  Ray Garza worked a leadoff walk and Shane Keddy followed with a single.  After Matt Powell drew the second walk of the inning, Lance Coffman drove in the first run on a fielder’s choice and Zach Mosbarger tied the game with a sacrifice fly to left.  With Powell at third base with two outs, Josh Ray beat out an infield single to complete the come-from behind win.  It was the first opportunity Ray had to swing the bat after being hit by pitches his first four times at the plate.

Mosbarger finished with four hits, three RBI and a stolen base.  Hand Burditt led off the Coyotes third with a double that started a four-run inning.  Southpaw starting pitcher Eric Schweiger was impressive for the Coyotes allowing one run on three hits.

The Bootleggers defeated the Snowbirds 8-4 thanks to two homeruns by Brian Wuest.  Wuest hit his first homerun, solo shot in the first inning and followed that with a three run homerun in the second.  Wuest finished the day with four RBIs.  Hayden Shirley pitched three innings to get the win.  Shirley gave up one run while striking out five batters, Shirley walked two batters in his three innings pitched.

The Snowbirds were lead by Willy Romero who went 1-3 with two runs. The Snowbirds tallied just five hits against the Bootleggers pitching staff.

The Snowbirds will have the day off tomorrow and the Bootleggers will play the Power tomorrow.

Propelled by four runs in the bottom of the 3rd inning, the A’s earned their second win in three days, taking down the Power 4-2.  Two errors and a botched rundown allowed the A’s to extend the inning and erase a 1-0 deficit to turn the game in their favor.  Emmett Ackerlund, Chris Ray, Jon Mestas and Christopher Whitehead all scored in the inning.

Griffin Jones was masterful for the A’s on the mound allowing just one run in five innings of work.  Jones commanded his fastball well and featured a devastating breaking ball that he mixed in to strike out eight while allowing only one hit and two walks.  Jared Locke allowed one run in the final two frames to earn the save for the A’s.