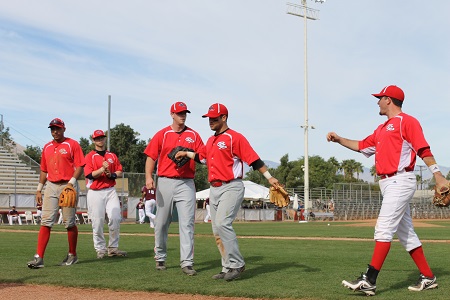 The Snowbirds (2-2-1) behind solid pitching and patient hitting cruised to an 11-0 win over the Palm Desert Coyotes (1-4). The pitching by the Snowbirds was led by their starter Dillon Ryan.

Ryan gave the Snowbirds two solid innings as he struck out two while giving up no runs on just one hit. Ryan would be the first of four pitchers for the Snowbirds who combined to shut out the Coyotes.

The big inning for Coachella Valley was the 5th when the Snowbirds sent 11 batters to the plate and scored eight of those. The problem for the Coyotes was pitching in particular control, as two pitchers combined to walk five batters.

The win gives the Snowbirds two on the season as they move into 6th place in the CWL standings the loss for the Coyotes gives them four on the season and drop them into a tie for last.

Power Shut Down Haymakers In Win

The Palm Springs Power (3-2) used some early offense on Tuesday morning, to cruise past the Midwest Haymakers (3-2) by the score of 5-0.

Power third baseman Travis Clark went 3-for-4 with a pair of singles, a triple and two RBIs in the win.  Power pitchers Stevel Landell, Cole Brocker and Michael Londino combined for seven scoreless innings. Brocker struck out six hitters in his three innings of work.

Tyler Surnbrock went 3-for-4 with a pair of RBIs in the win as well. Haymakers starting pitcher Nick Woodward worked five strong innings but didn’t receive much defensive help as he allows five runs with only two of them earned.

The Midwest Haymakers have now lost two straight games after starting the season 3-0.

Chill and Bluesox Duel to a 6-6 Draw

The morning matchup at Palm Springs High School featured the Washington Bluesox going up against the Palm Springs Chill. The Chill got the scoring going early on when Masahiro Miyadera singled and came all the way around to score in the bottom of the first. It was a throwing error by Bluesox catcher Jarel Lewis that allowed three runs to come home.

The theme of errors leading to runs continued in the top of the third.  A throwing error by third baseman Toma Furuichi on a ball batted by Justin De La Nuez allowed Chris LaPenna to step to the plate. LaPenna capitalized on the opportunity by blasting a three run homerun.

The game was a back and forth affair with both teams scoring twice in the sixth to ensure this matchup would end in a 6-6 tie.

A’s Edge Lumberjacks In Back and Forth Game

In the afternoon session at Palm Springs High School, The Canada A’s took down the Oregon Lumberjacks by a score of 4 to 3. It was a pitcher’s duel for much of the game. Jaspreet Shergill of the A’s pitched well despite giving up a third inning solo shot to Vincent DiFazio of the Jacks. Shergill was able to pitch five innings while striking out six.

In his first at bat of the game after entering as defensive substitute, Andrew Romanella of the A’s delivered a RBI single in the bottom of the fifth to tie things up. The winning run of the game came via some sloppiness on the part of the Lumberjacks. After doubling with one out in the bottom of the sixth, Kyle Clifton attempted to steal third base. The ensuing throw from catcher Jordan Drake sailed into left field allowing Clifton to carry in the eventual winning run.