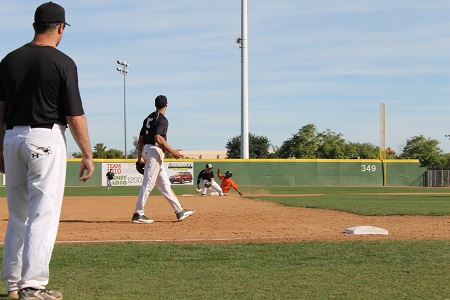 Early lead proves too much for Snowbirds to Overcome

The Coachella Valley Snowbirds (2-3-1) mounted a comeback against the Washington Bluesox (2-2-2) but the early seven to nothing lead by Washington proved too much to overcome.

Early in the contest defensive excellence was on display with diving catches by Paul Rambo for the Bluesoxs and Matt Forgatch for the Snowbirds. Pitcher Michael Shaub for the Bluesoxs threw four solid innings allowing no runs and only three hits while striking out three on his way to the win.

The Snowbirds offense was late to the party striking for their first runs in the 5th when they tallied four. The comeback made for exciting baseball in the 7th when the Snowbirds were able to get the tying run on base and the winning run to the plate, but pitcher Sean McInteyre was able to close the book on the Bluesox’s second win of the season

Hayden Shirley leads the Bootleggers to their fifth win

The Bay Area Bootleggers took down the Palm Desert Coyotes 6-1 in the second game of a doubleheader at Palm Springs Stadium.  Hayden Shirley threw three innings giving up just one run and striking out five Coyote batters. Shirley would get the win and is now 3-0 on the season.

The Bootleggers had seven hits and were led by Erik Underwood who had two singles and one run. The Bootleggers did most of their damage in the sixth inning where the scored four of their seven runs.

Hank Burditt, usually a first baseman threw the first three innings for the Coyotes.  Burditt gave up  two runs in those three innings.

The only offense the A’s needed came in the second inning when Jon Mestas blasted a two-run homerun over the left field fence to put the A’s out in front 2-0.  John Mireles followed with a triple, but was stranded at third base to end the inning.

The A’s added an insurance run in the bottom of the 4th when Mireles drove in Emmett Ackerlund, extending the A’s lead to 3-1.  Jones then slammed the door on the Haymakers in the 5th to end the game.

Haymakers starting pitcher Jesse Holiday left the game with one out in the second inning with soreness in his arm.

Strong pitching was on display from both sides, as neither starting pitcher allowed a run.  For the Bombers it was Chris Rice tossing three scoreless frames and for the Chill, Mitsuo Nakamura put up a pair of zeroes.

The only scoring of the game came in the fourth inning when Chill catcher Seth Spivak knocked in two runs on his double.  Fred Luchetti threw a scoreless third and fourth for the Chill to pick up his first win.  Sidearmer David Teasley then shut down the Bombers in the sixth and seventh to earn his second CWL save.