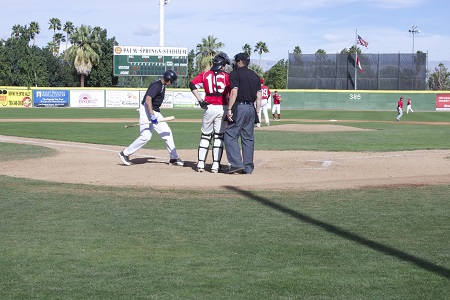 Max Duval was perfect in his five innings pitched as he guided his Oregon Lumberjack (4-3) to a 4-1 victory over the Washington Bluesox (2-3-2).

For five innings at Palm Springs Stadium Max Duval perplexed Bluesox batters. He not only did not allow a base runner but dominated by striking out eight in his impressive outing. The pitching effort was picked up by Kevin Rogers and Joseph Perrota who combined to allow just one run and finish off the Bluesoxs.

On the offensive side of things the Lumberjacks got started in the third inning with three consecutive singles by Tyler Sciacca, Nick Schulz and Vincent Difazio respectively. Both Sciacca and Schulz would come around to score latter in the inning, giving the Lumberjacks an early 2-0 lead that would prove enough. Mathew Thomas would add an RBI triple in the seventh.

The Bootleggers came into Friday’s matchup versus the Haymakers without a loss on their ledger. By the end of the day, their record showed its first blemish of the season. A shaky first inning from starter Robert Morales did in the Bootleggers. He struggled with his control, walking 4 and allowing 3 runs in an inning where the Haymakers batted around.

It took stellar pitching from the Midwest ball club to ensure that the Bootleggers lost their first game of the year. Starter Josh Graves threw five shutout innings while striking out three and only walking one lone Bootlegger.

The Haymakers only needed two pitchers to subdue the Bootleggers’ bats and finish out a 4-1 victory.

Ryan Dejesus takes a no-hitter into the seventh inning, in 1-1 tie vs the Coyotes

The Palm Desert Coyotes and Palm Springs Power were in a pitching duel throughout a seven inning game at Palm Springs Stadium.

The teams would end up tying 1-1 as Ryan Dejesus took a no-hitter into the seventh inning.  Dejesus gave up a leadoff triple to Josh Ray and an RBI single to Zach Mosbarger before Michael Londino would enter the game.  Londino faced three batters and retired each to secure the tie for the Power.

Eric Schweiger started the game for the Coyotes giving up one run in the first inning.  Schweiger would go three innings striking out three.

The bats came alive at Palm Springs stadium as the British Columbia Bombers defeated the Canada A’s 6-5. The two teams met for the second time in as many days, but after yesterday’s tie both teams were battling to have true bragging rights over their Canadian rivals.

The Bombers had been victimized by late inning drama all season long, but in Friday’s game British Columbia turned the tables. After blowing an early 5-1 lead, the Bombers turned the tables with some late- game heroics of their own. Playing in only his second game of the season, Chris Valencia roped a one out double in the top of the 7th. He would proceed to steal third and come home on Scott Kalamar’s clutch RBI single.

The A’s would put the potential tying run on third base with two outs, but Deaun Williams struck out to end the thrilling 6-5 game.

ALL GAMES AT PALM SPRINGS STADIUM