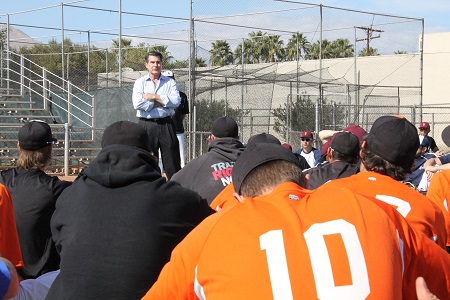 (Steve Garvey address the players before the afternoon game)

It was a back and forth contest early on between the Canada A’s (4-6-1) and the Palm Springs Chill (5-4-2) but the late substitution of Christopher Kashangaki was the difference.

The Chill struck for two runs in the bottom of the first inning to get the scoring started. The lead was short lived as the A’s were able to hang their own crocked number in the top of the second plating three. Two home runs in the inning one by Kyle Clifton and a two run shot by Kameron Brunty gave the A’s a 3-2 lead.

For most of the game the A’s were able to hold their one run advantage until the bottom of the sixth when the Chill down to their last four outs were able to plate four runs. Late game substitution Christopher Kasangaki came to the plate in a then tie game 3-3 with two on, when on a three one count the leftfielder slugged a three run homer into left center, giving the Chill a 6-3 lead that they would not look back on.

Kashangaki would later add an excellent defensive play while in the field in the top of the seventh. The catch in Leftfield allowed pitcher David Teasley to earn the save.

In a pitcher’s duel at the auxiliary field the Palm Springs Power (5-4-1) prevailed 1-0 over the British Columbia Bombers (4-6-1). Pitcher Heath Gray was masterful in his six innings pitched for the Power.

Left-handed pitcher Christopher Rice threw three dominant innings for the Bombers on his way to striking out five and allowing only one hit on no runs.

The game remained scoreless until the top of the fifth when the Power were able to string three singles together to plate the game’s only run. Designated hitter Garreth Anderson provided what proved to be the difference with his RBI single that brought in Matt Lowenstein.

With Heath Gray going six shutout innings all that was needed was one more shut out inning from Cole Brocker, who did just that. Brocker walked two but also struck out the side to earn the save and give the Power the 1-0 win.

Snowbirds cruise to 11-2 win over Coyotes

Ray Garza and Matt Schroeder each drove in run in defeat for the Coyotes who drop to 1-8-1.

It was a heavyweight bout at Palm Springs Stadium as the two teams atop the standings of the California Winter League went head to head. Entering the day, the Bay Area Bootleggers led the Oregon Lumberjacks by one half game for first place. The Bootleggers had been the consistent team from the get- go, but over the last couple weeks the Jacks had been coming on strong.

The action started early when Bootleggers starter Colby Gurney induced a fly out from Mike Visloski with a runner in scoring position. Bay Area would go on to score a run in four of the six innings that they came to bat. They were led by the Underwood twins who combined to go 3-6 with 3 RBI’s.

It was a complete performance for the Bootleggers, who gave up only one unearned run to Oregon. Bay Area was solid in all facets of the game and picked up a comprehensive 5-1 win.