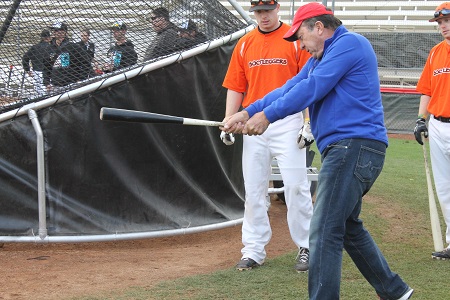 The Midwest Haymakers (8-3) rode an early lead to victory over the first place Bay Area Bootleggers (8-3-1).

Both teams managed to push across a run in the first. But the game was then taken over by the new arrivals chiefly Brendon Lafferty and Nick Aikens both got off to fast starts in the California Winter League.

The new addition for the Bootleggers Josh Corales struggled in his first day facing CWL hiters. Corales allowed five runs four of which were earned. Outfielder Nick Aikens socked a double off Corales that plated a run in a three run third for the Haymakers.

Nick Aikens added an insurance home run in the 6th that kept the Haymakers on top for good. New pitcher for the Haymakers Brendon Lafferty closed the door with three solid innings allowing one earned run and striking out four on his way to earning his first save of the season.

The Canada A’s (5-6-1) defeated the Washington Blue Sox (4-5-2) 5-1 in the finale of the doubleheader at Palm Springs Stadium on Thursday.

A three run first inning was enough for the A’s on Thursday, sending nine men to the plate getting RBI singles Christopher Whitehead and Emmett Ackerlund. A’s starter James Ferguson was strong in his first start of the winter striking out five in three innings earning his first win of the season.

Canada added insurance runs in both the second and third innings extending the A’s lead to 5-0. The Blue Sox were able to get on the board in the fourth thanks to an RBI single from DJ Andrade cutting the deficit to 5-1.

Yogi Lynch was able to hold to Blue Sox at bay preserving the 5-1 win for Canada. James Furgeson evened up his record to 1-1 with the victory while Chris Pfau suffered his first loss of the season falling to 0-1.

The Oregon Lumberjacks rout the Palm Springs Power 7-0 thanks to a masterful performance by starting pitcher William Patterson.  Patterson threw a complete game giving up just on hit.

The Lumberjacks offense was led by Nash Hutter who hit a three run homerun in the fourth inning.  It was all Lumberjacks throughout as the only Power hit was by Matt Burns in the second inning.

The Power fall to 5-5-1 and the Lumberjacks would improve to 7-4 on the season.

The Palm Desert Coyotes and British Columbia Bombers tied 7-7 in the first game at the auxiliary field Thursday morning.

The Bombers were led by Kentrail Pierce who threw 5.2 innings and striking out 11 batters.

Josh Ray hit a two run home run in the second inning for the Coyotes.

It would take two runs by the Bombers to tie the game up in the bottom of the seventh as Matt Kirkwood would drive in the final run of the game.