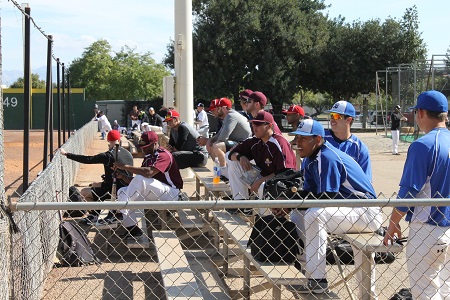 The British Columbia Bombers (4-7-2) once again struggled to hold a lead late and fell to the Palm Springs Chill (7-3-2) four to three.

The offense for the Bombers all came in the first inning off Chill starter Takaki Sato who issued two free passes and received a big hit from Scott Kalamar who tripled to bring in two runs. The offense stalled after and was nearly thrown to victory by a great pitching performance by Ryne Drummond.

The Chill scored their runs in bunches two in the third and two more in the sixth. Power has illuded the Chill in the CWL but today it was the difference as three extra base hits were tallied and all came with runners on base. Corwin Kim missed a home run by inches in the sixth as his line drive hit off the top of the wall and sent him to second on a stand up double. Kim would come around and score on the Ryo Harayama double that followed.

Closer for the Chill David Teasley collected his fourth save in tossing a perfect ninth inning.

A slugfest may have been expected when the Snowbirds sent outfielder Will Scott to the mound to start against the Power, but Scott quickly showed he has the makings of a quality pitcher as a first-inning walk was one of only two baserunners he would allow in three innings of work.  Scott promptly picked the runner off of first base and a hit batter in the third inning would be the last time the Snowbirds would reach base in the game.  Dillon Ryan came in to retire nine straight and in the seventh it was up to Timothy Vonder Haar to retire the final three batters.  The first out came easily on a strikeout, but the final two did not prove as easy.  A soft looper to short with one out sent Eddie Young charging onto the grass and after playing a tough hop, fired a rocket to first just in time to get a speedy runner.  Andre Oliver initially bobbled the final groundball of the game at second, but recovered in time to make the play and complete the first no-hitter of the 2014 California Winter League.

Andre Oliver led the way offensively for the Snowbirds, reaching three times on two singles and a walk.  As a team, the Snowbirds stole eight bases and took advantage of three Power errors en route to a 6-0 win.

The Oregon Lumberjacks (8-4) beat the Midwest Haymakers (8-4) 9-1 in game one at the Auxilery field on Friday.

Lumberjacks first baseman Mitchell Malfitano went 3-for-4 in the contest with a grand slam homerun that put the Lumberjacks on top of the Haymkers 5-0 in the second inning.

The Haymakers scored their only run in the top of the third inning when Bryan White doubled in Kyle Peterson.

Max Duval picked up the win for the Lumberjacks while Matt Broder was charged with the loss for the Haymakers.

The Blue Sox were the recipient of a huge day offensively from Mark DiTammaso who went 2-for-3, driving in six runs. DiTammaso’s biggest contribution came in the third inning smacking a three-run homerun.  The Bootleggers offense was unable to keep up with the Blue Sox despite the efforts of Matt Flieshman who went 3-for-4 with a single, double and a triple while scoring three runs.