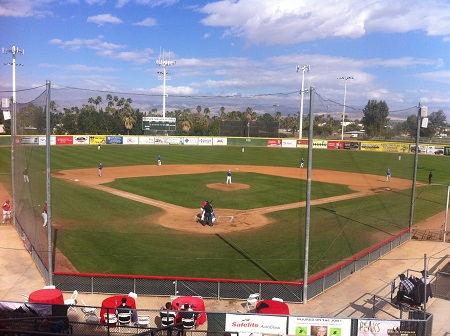 Snowbirds hold on to 6-5 Victory

In an upset at Palm Springs Stadium the Coachella Valley Snowbirds (5-8-1) outlasted the Midwest Haymakers (8-5-1)6-5.

Both the Snowbirds and Haymakers scored their runs in bunches. The big inning for the Haymakers was the 5th when the Haymakers capitalized on walks and errors to take the lead. Andrew Camradella remained hot lashing a double down the third base line to get the inning started; he would come around to score on a Michael Hur RBI single.

The Snowbirds were able to the tie the game in the sixth with a three run inning. Tilman Pugh contributed an RBI double to the rally but the big hit was a Bobby McGlaughlin single that brought Tilman Pugh and Joseph Munn around to score for two RBI’s that tied the game.

With the Game tied at 5-5 in the bottom of the seventh Ryan Breen tripled with one out. One walk latter Joseph Munn would hit the game wining sacrifice fly to center to give the Snowbirds a 6-5 walk off win.

Chris DeBoo and Chris Pfau were on their games all day long and they combined to shutout the Jacks 3-0.  DeBo went five innings, allowing five hits and one walk while striking out two to earn his second win of the season.  Pfau threw the final two frames and did not allow a baserunner while striking out four and earning his second save.

Everything the BlueSox would need offensively came in a three-run third.  The inning saw five base hits, starting with Chris LaPenna’s double.  DJ Andrade delivered an infield single scoring LaPenna for the game’s first run.  Paul Rambo followed up with an RBI double and Isiah Washington brought in the final run on his RBI single.  Washington finished the day 3-3 in his first game back from a hip injury.

Slugfest goes way of the Chill

It didn’t take long for the Chill to respond adding three more runs in bottom of the third thanks in part to an RBI single from Evan Boyd. With the Chill trailing 9-8 in the Chill sent nine men to plate for the second time scoring six runs on their way to a 15-9 win over the Power.

Boyd continued his hot hitting going 4-for-4 driving in four runs. Tikatki Sato picked up the win for the Chill while Casey McMickle was charged with the loss.