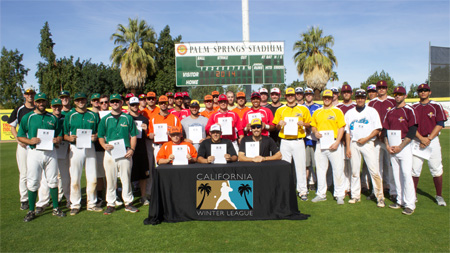 The California Winter League held its Signing Day on Tuesday, February 11th. A ceremonial contract signing was held in center field in between games on Tuesday. Players signed with the premier independent leagues in the country including the Frontier League and the American Association. Players who signed ranged from current professionals to college players who were overlooked during their collegiate careers.

More players will be signed in the upcoming days, as the players will work out in front of scouts on Wednesday before starting the playoffs Thursday. The opportunity for this number of players to sign is possible because of the exposure the California Winter League gives players.

The California Winter League have seen close to 300 players sign professional contracts in the leagues five years of existence.

The Canada A’s came back from an early two nothing deficit to the Hyamakers in the fourth inning. Trailing 3-1 the A’s sent just five batters to the plate but benefited from some big hits. Emmett Ackerlund opened the inning with a triple and would score on a Chris Ray sac fly. One batter latter catcher Larry Balkwill homered to tie the score at three.

The difference was the sixth inning when the A’s would play more station to station sending seven batters to the plate and scoring two runs in the inning. Chris Ray doubled and would score on a Ryan Sonberg RBI single.

Pitcher James Ferguson closed out the Haymakers with a scoreless seventh inning.

Both the A’s and the Haymakers will receive first round byes in the California Winter League playoffs and will face a yet to be determined opponent on Friday.

The final day of the regular season saw everything come together for the Lumberjacks who benefited from consistent offense and dominant pitching. Max Duvall looked the sharpest going three innings, allowing no runs, just one hit and striking out five.

On the offensive side of things Vincent Difazzio led the way with a three for three day with one double and two runs scored. The big hit came in the first inning on a three run homer by first baseman Nash Hutter.

Both the Lumberjacks and Bluesox have first round byes in the California Winter League playoffs,  and will play a yet to be determined opponent on Friday.

The Palm Springs Chill played catch up all game to the Bay Area Bootleggers before being able to take the lead with an eight run top of the seventh inning. Masahiro Miyadera drove in two runs with a double down the left field line to give the Chill the lead.

The Chill was lead offensively by Masahiro Miyadara who went 2-for-3 with two doubles and two runs batted in, in the win.

Hunter Ridge provided a spark on offense for the Bootleggers going 3-for-4 with a pair of doubles. David Teasley picked up the win for the Chill while Colby Gurney was pegged with the loss.

Early in the morning at Palm Springs Stadium the British Columbia Bombers took down the Coachella Valley Snowbirds. It was the final day of the regular season in the California Winter League and both teams were battling for playoff positioning.

The Bombers got the scoring going early and often. Four runs were plated in the top of the first inning. The inning was highlighted by a Brent Carmichael 2 RBI single.

Despite the early deficit, the Snowbirds would have numerous opportunities to claw back into the game. Overall, Coachella Valley stranded 12 runners on base as the clutch base hit never came regardless of the many chances the Snowbirds had.

Wilmy Marrero would pick up the lone RBI for Coachella Valley in the bottom of the sixth, but it wouldn’t be enough as the Snowbirds fell 9-1.

Coyotes put it all together in 9-1 rout of Power

Scoring early and often, the Coyotes rode their bats to a decisive 9-1 win over the struggling Power.  In the 1st inning, Zach Mosbarger singled, stole second and was driven home on a base hit from Shane Keddy.  The Coyotes would add another run in the 2nd as Matt Marquis scored on a wild pitch.

The real damage came in the 4th when the Coyotes scored four more runs to put the game away.  Doubles from Nathan Tomaszewski and Matt Powell, along with singles from Lance Coffman, matt Marquis and Josh Ray led the way.  Three more insurance runs were added in the 6th, highlighted by a two RBI double from Marquis and an RBI single from Mosbarger.

Zach Sterling struggled with command, but pitched himself out of jams and earned the win by giving up one run in three innings of work.  Casey Woods threw the final three innings of a shortened six-inning contest and picked up his first save.