PALM SPRINGS, Calif. – History was made at the California Winter League today, as a player was signed to a major league deal on the first of workouts, a feat that has never been accomplished in the seven year history of the league.

During the first morning of MLB workouts it was announced that Evan Crower would be given the opportunity to play professional baseball, receiving a contract offer from the Philadelphia Phillies.

The left-handed pitcher was seen throwing in the bullpen on Tuesday morning and immediately started creating attention with his mid-90s fastball. That amount of velocity from a southpaw caught every scouts’ attention, and Phillies area scout Mike Garcia was able to put together the best contract offer for Crower.

When asked how he felt after being presented with a professional contract offer after just one day of workouts, Crower said, “It’s crazy! I’m very excited for the opportunity and to get out to Clearwater for spring training and start the grind.”

Crower, who graduated from Stanford University in June of 2015, went into college as a two-sport athlete, playing both baseball and football. After some time had passed he decided to stick to one sport and was named backup quarterback for the Cardinal, playing behind three-year starter Kevin Hogan and NFL All-Pro quarterback Andrew Luck. Due to his frame (6’6” 220 lbs) and his history of having a cannon for an arm, he’ll go from tossing the pigskin, to slinging the baseball, all thanks to the California Winter League.

When asked what made him decide to switch from football to baseball after his graduation, Crower said, “I’ve always wanted to be a baseball player growing up. I was going into Stanford playing both sports and it just didn’t work out. I was going to head somewhere else for my fifth year, and just decided to pick up the baseball and start throwing again after I graduated. Then I got the opportunity to come out here to show my talent and what I can do. Fortunately enough I was seen, and right now I’m just really excited.”

Crower headed back home to San Diego Wednesday night where he met a representative from the Philadelphia Phillies to sign paperwork. He’ll then be flown out to Clearwater, FL to perform in their Spring Training program. 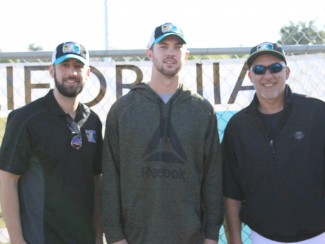