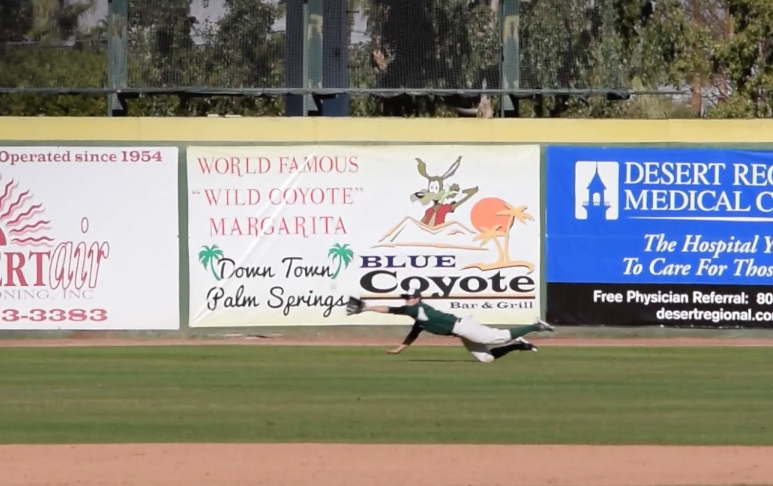 PALM SPRINGS, Calif. –– As the 2016 California Winter League regular season nears its end, the Canada A’s and the Manitoba North Stars remain tied atop the league standings, while the streaking Toronto Rush are just half a game behind the pair. With all three ball clubs winning hard fought games today, the final days of the season has all the makings of a true pennant race.

The day began on the auxiliary field of Palm Springs Stadium complex, where the Canada A’s became the first team to reach eight wins by defeating the Washington Blue Sox. Trailing 1-0 in the fourth, the A’s scored three runs thanks to a clutch RBI double by TJ Braff to go ahead 3-1. The Blue Sox, winners of their previous three, rallied back by scoring two in top of the sixth on Kaleb Barlow’s two-out, two-RBI single. However the jubilation of Blue Sox fans would be short lived, as Canada manufactured an unearned run in the bottom half of the inning due to the speed of center fielder Taylor Douglas, before reliever TJ Pruneda nailed down the save. Canada (8-3) defeat Washington (4-7),  4-3.

In the day’s first action on the main field at Palm Springs Stadium, the Oregon Lumberjacks fought back from a 3-0 first inning deficit to defeat the Coachella Valley Snowbirds. The Jacks scored one run in each of the second and fourth innings before breaking through for three in the fifth to take the lead for good on a pinch hit, two-RBI single by Corey Andrade. Blake Evetts earned the win after pitching five strong innings, while Elijah Briseno went 2-3 with two runs scored for the Snowbirds, pushing his batting average to .316. Oregon (5-5-1) defeat Coachella Valley (2-9), 5-4.

Back on the Auxiliary Field, the Toronto Rush took over sole position of third place by shutting out the now-fourth place Palm Springs Chill. In the early going, the game had the feeling of a real pitchers duel, with starters Seth Powers of the Rush and Brian O’Keefe of the Chill matching each other pitch-for-pitch. However, things changed in the fifth when the Rush plated three runs on four hits, including a run-scoring double by Joshua Wenger. Meanwhile, relievers Kevin Wirth and Byron Reichstein stifled the Chill bats down the stretch complete the shutout. Toronto (8-4) defeat Chill (6-4-1), 4-0.

Back on the main diamond for the second game of the Out-of-Towner Day doubleheader, the New York Colonials plated four runs in the first and cruised to 5-2 victory against the Alberta Grizzly. Buoyed by the early offensive success of his teammates, starting pitcher Michael Tamburino struck out eight Grizzly’s over his four innings of work while allowing just a single unearned run en route to earning the win. Alex DeBellis paced the Colonial attack with two hits, two runs scored, and two RBI, while Adam Picard led Grizzly notables with a 3-4 day that included a pair of doubles, two runs scored, and an acrobatic catch in left. Grizzly center fielder Dave Clark also provided some excitement for the Alberta fans in attendance he laid out to make a diving catch in the left-centerfield gap to rob Keenan Chanin of extra bases. New York (6-4-1) defeat Alberta (6-5), 5-2.

In the day’s final action, the Manitoba North Stars kept pace with the Canada A’s atop the league standings by earning a narrow 2-1 victory over the British Columbia Bombers. North Stars’ starting pitcher Colin Moberly earned the win by hurling a complete game effort in which he scattered seven hits and struck out eight Bomber batters. For British Columbia, third baseman  Bobby Webb finished the ballgame 2-3 with a double and a run scored, upping his batting average to an impressive .481. Manitoba (7-2-2) defeat British Columbia (4-7-1), 2-1.

The 2016 California Winter League season continues on Friday, with both first place teams in action on the main diamond. First, the Canada A’s take on the Midwest Haymakers at 10:00am, followed by a matchup between the Manitoba North Stars and Bay Area Bootleggers at 12:30pm. It will be Canada Day at Palm Springs Stadium, so bring your valid Canadian ID’s in order to gain $2 admission to the ballpark!