Former Cricket Player Catching On in the CWL

Of the close to 300 players showcasing their talents at the California Winter League, the vast majority have already garnered at least a decade of baseball experience prior to setting foot in Palm Springs.

Jordan Thliveris is not one of them.

The 24-year old had not played a single game on the diamond before graduating high school.

A native of Sydney, Australia, Thliveris switched to baseball less than five years ago.

“We played grade cricket back home in Sydney, and I was playing second grade, which is pretty high-level, so we played a lot of state teams and representative teams.

“I just kind of always had an interest in baseball, and I’m glad I moved down this path now.”

Both cricket and baseball are bat-and-ball games played between two teams, but the similarities from the pitch to the diamond hardly extend much further.

“Hand-eye coordination is pretty similar, but in terms of swings, it’s very different,” Thliveris says. A natural right-hander, Thliveris serves as a switch-hitter while playing for the Toronto Rush in the CWL.

He says that developing his left-handed swing was actually simpler. Growing up as a right-handed cricket player, Thliveris had to rework his mechanics for baseball.

“Learning from the left side was a lot easier because I learned from the ground-up, whereas from the right side it’s kind of a bit rigid because of that cricket style,” he says.

The game of cricket entails a much different approach.

“A lot of the time you want to hit the ball into the ground, so your body’s kind of out on your front leg,” Thliveris explains. “Mainly if I ground out, it’s to third base because of that reason.”

With an opportunity to focus on developing his swing from both sides at the CWL, Thliveris has become even more valuable in the eyes of his coaches.

“Anytime you can hit from both sides of the plate it adds another dynamic to your game,” Toronto manager Matt Rusch says. “I encouraged it for sure after he came to me, and he can swing it from both sides. He looks very comfortable.

“Usually guys are stronger from one side or the other, but with him, he’s very balanced.”

Thliveris took to baseball quickly, and has relished all opportunity to continue to progress.

His journey to baseball has taken him around the globe – including a stop in Europe as a member of the Greek National team in 2014.

Born Yiorgos Thliveris, his Greek decent and athletic prowess led him to an invitation to join the Greek National team at the European championships.

While initially not guaranteed a spot, Thliveris tried out and won the job as a starting second baseman for Greece in the European Cup, competing with teams from the Netherlands, Czech Republic, Great Britain, Croatia, Sweden, Russia, and Spain.

“The Dutch guys, most of their guys were Single-A ball/Double-A ball players, I think (former Major League outfielder) Roger Bernadina was on their roster as well,” Thliveris says. “Some really good competition.”

Two years and more than 6,000 miles later, Thliveris arrived in Palm Springs to play for the Toronto Rush in the 2016 California Winter League. Primarily an infielder at Anne Arundel Community College and with the Greek National team, Thliveris began another transition to a new position over the past couple of months. Rusch is impressed with his early development as a receiver.

“He’s a quick learner, first of all.”

“He has a great knowledge for the game, so that makes it easier to convert positions like that,” Rusch says. “He’s really coming along quickly, a lot quicker than I really imagined.”

Donning the tools of ignorance is perhaps the most mentally and physically taxing position on the field. As a catcher, Thliveris is involved in every pitch, every play.

While developing his skills behind the plate, Thliveris has also continued to serve admirably as a middle infielder in the CWL.

“He’s a very athletic kid and a great utility player for us,” Rusch says. “He’s definitely one of the driving forces behind why we’re playing some good baseball right now.”

Like all CWL players, Thliveris aspires to a professional contract, completing a conversion not unlike that of Jarryd Hayne – a fellow Sydney native who successfully made the switch from highly-competitive rugby to the National Football League. Having just four years of experience, Thliveris’ potential is still far higher than the output he has already shown.

Although he has certainly found success thus far in the CWL – a .333 average and no errors committed in his first seven games – Thliveris knows he is far from a finished product.

“I want to keep improving. I feel like I’ve got a long ways to go until I kind of reach my peak in baseball, so I’ll be patient for another couple years,” Thliveris says. 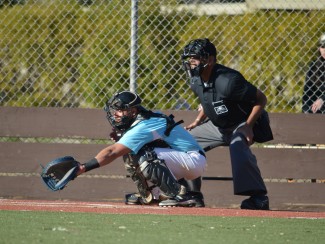