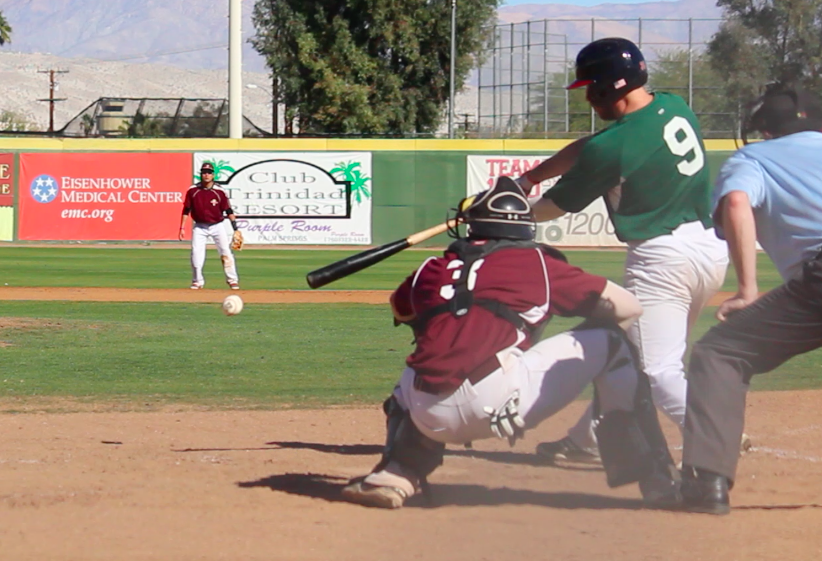 PALM SPRINGS, Calif. –– With just two days left in the 2016 California Winter League season, the battle for positioning atop the league standings is heating up with the Manitoba North Stars, Canada A’s, Toronto Rush, and New York Colonials all separated by just a single game at the start of the day’s action.

The day’s first ballgame featured the British Columbia Bombers taking on Toronto Rush. With a win, the Rush would move a half game ahead of the Canada A’s for sole possession of second place, and could possibly move them into first place pending the result of Manitoba’s ballgame later in the afternoon. The game got underway with a bang as Pete Leonello smacked a base hit to center before coming around to score on Blake Marchant’s RBI single to give the Bombers a 1-0 lead. This would prove to be the high point for the Bombers, as the Rush would score two runs of their own in the bottom half of the first to take the lead 2-1, and starter Seth Powers would recover from his early struggles to allow just one hit over the next four innings while striking out six Bombers. Toronto (10-4) defeats British Columbia (4-9-1), 6-1.

The day’s first action on the main diamond at Palm Springs Stadium featured the New York Colonials and the Palm Springs Power. Needing a win to stay alive in the hunt for a first round playoff bye, the Colonials turned to their ace, Tanner Kiest, who delivered a dominant performance over six scoreless innings, allowing just one hit and striking out ten Power batters. On the offensive side, Joe Jensen drove in three runs on the day, while every Colonial starter reached base at least once. Brian Wiest relived Kiest and pitched a scoreless seventh to earn the save. New York (8-4-1) defeats Power (6-7), 7-0.

Like the Colonials, the Palm Springs Chill needed a strong performance from their ace Ryan Strombom in order to keep themselves within striking distance of the crucial second seed. In the early going it seemed like the Chill would carry the day, as their offense scored four times in the first inning against Washington Blue Sox starter Kevin Nutley –thanks in part to Devin Alexander’s two-run double. These would prove to be the only Chill runs of the ballgame, as Nutley righted the ship with a scoreless second, and three Sox relievers –Kenny Knudsen, TJ Whidby, and Luke Barker– combined to allow just a single Chill baserunner the rest of the way. As the ballgame progressed it became apparent that Strombom did not have his best stuff, though to his credit he did deliver a gritty performance over six innings, but was in the end unable to prevent the Blue Sox from pushing access four runs of their own. Chill (7-4-2) tie Washington (4-8-1), 4-4.

In what was perhaps the day’s most exciting finish, recent San Rafael Pacifics signee Kyle Adie hit a two-run single in the bottom of the seventh inning to lead the Alberta Grizzly to a walk off victory over the Midwest Haymakers. With the game tied at a run apiece, the Haymakers scored two in the fifth thanks to RBIs from Ryan Gerber and Sheehan Planas-Arteaga, and led 3-1 into the seventh. After a leadoff walk to Brett Huffman, Brian Fay smashed a double to put the tying runs on second and third. Haymakers manager Gabe Suarez then ordered his pitcher Jashawn McDaniel to walk Tyler Gurman intentionally to load the bases. McDaniel then struck out the next batter, but allowed an RBI single to Tanner Oymaian which set the stage for Kyle Adie, who cashed in the final two runs of the ballgame for the Grizzly with a single up the middle. The RBIs were Adie’s eleventh and twelfth on the season, moving him into first place in that category on the CWL season leaderboard. Alberta (7-5-1) defeats Midwest (5-8), 4-3.

The final game of day the saw the Oregon Lumberjacks stun the first place Manitoba North Stars by a final score of 8-4. Jordan Runcie-Hubbard led the charge for the Jacks, going 4-4 with a triple and four runs scored on the day, while Brendan Remalia contributed a hit and an RBI to push his team leading batting average to .381. For the North Stars, Dakota Freese struck out six over six gritty innings as the hard luck loser, and Victor Barron launched his league-leading fourth home run, a towering blast in the seventh that cut the Oregon lead to 8-4. The loss pushes Manitoba out of first place for the first time in over a week, as they now trail Toronto Rush by half a game heading into the season’s final day. Oregon (6-5-2) defeats Manitoba (8-3-2)

The California Winter League continues on Tuesday with the final day of the regular season! We’ll have three ballgames in the main stadium with first pitch at 9:30am! First up will be Manitoba North Stars vs the Coachella Valley Snowbirds, followed by the Palm Deserts Coyotes and Palm Springs Chill at noon, and the Midwest Haymakers and Palm Springs Power at 2:30pm! It will be Two-for-Tuesday at Palm Springs Stadium! So come on out to the ballgame for $2 admission, $2 hot dogs, $2 soft drinks, and $2 draft Budweiser and Bud Light!