PALM SPRINGS, Calif. – The California Winter League is proud to announce that Steven Pollakov, a catcher for the 2016 Palm Desert Coyotes of the CWL, has signed with the Chicago White Sox.

Pollakov, a 6’0”, 210 pound catcher from Chicago, Illinois, previously played baseball at the University of Hawaii and Orange Coast College before coming to the California Winter League.

Pollakov will report to White Sox spring training on February 19th, with all of the other pitchers and catchers. Non-pitchers will report four days later on February 23rd. 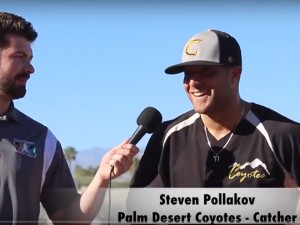