PALM SPRINGS, Calif. – 2014 CWL Alumni Max Duval had his contract purchased by the Arizona Diamondbacks on Saturday. Duval was signed out the CWL by the Evansville Otters and became their Opening Day starter in 2015. He caught the eye of the Diamondbacks’ organization and had his contract purchased from the Frontier League. This is a common occurrence, as the Frontier League is generally considered a “feeder league” to the majors due to the league’s talent and requirement of having a certain number of rookies rostered.

Here is Our Sports Central’s story on the Duval signing: http://www.oursportscentral.com/services/releases/otters-pitcher-signed-by-arizona-diamondbacks/n-5166474 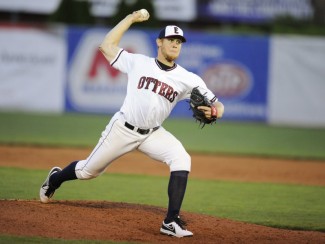