Murphy Coming Back to CWL After Successful Year in Atlantic League

Update: Nick Murphy will be coming back to the California Winter League for the 2017 season. Despite being signed professionally, many players return to the CWL in order to improve their skills and also to pursue MLB affiliated opportunities.

NEW BRITAIN — Backup players of any type, especially the backup catcher, typically don’t get any type of notoriety or attention. A backup catcher might get the chance to start every fifth day or so to simply spell the starter. But the New Britain Bees feel as though their backup catcher, Nick Murphy — a player in his first season in the Atlantic League — has caught their attention and has the ability to be more than just a backup.

At 23-­years-­old, Murphy finds himself in his first season of professional baseball at any level, independent or affiliated, and with any rookie season can come some challenges adjusting to new teammates and opponents. But even as the youngest guy on the team he has already made an impression on the veterans in the locker room and his coaches for his work ethic and his ability to handle a pitching staff that features a number of players who have spent time throughout the minor and major leagues.

In other words, they say, he carries himself like one of the veterans.

“He’s unbelievable behind the plate,” Bees player­-coach Craig Maddox said. “I’ve never seen a rookie handle himself like Murph has. It’s impressive. What he does well is what every rookie should do. He shuts his mouth and he listens. I haven’t heard much from him. But he’ll do anything you ask him to do and he wants to learn and that’s the biggest thing with a lot of guys.

“You’re here [in the Atlantic League] to get out and the only way to get out is to get better and the only way to get better is to learn. He’s done that. Behind the plate to handle a guy like Cole Johnson and to handle [Grady] Wood and [Craig] Stem and those kind of guys that have years of experience in Double-­A and Triple-­A time and I feel like those guys never miss a beat with him.”

After his senior season at California State University, Northridge was finished Murphy was playing in the California Winter League where he impressed New Britain manager Stan Cliburn, who was at the time looking at a couple of pitchers and proceeded to sign him to a contract. But this league has been a whole different experience for Murphy as he navigates through the first half of the season.

“There’s been ups and downs, but it’s just a really good learning experience,” Murphy said. “I’ve learned a lot, listened to guy’s stories and everyone’s helping me out here, so it’s a good experience.”

Although he serves as the backup to James Skelton, Murphy will work in the bullpen during the days he is not starting, working on blocking balls in the dirt and with the pitchers during their warm-ups.

In 10 starts this season, the Bees have gone 6­-4 when Murphy is behind the plate, and in six of those games, opponents have been held to two runs or less. Despite the experience difference between him and most of the pitchers on the staff, guys like Brian Dupra and Josh Zeid have spoken highly of the rookie.

“I’ve never actually caught this talent wise throughout my career,” Murphy said. “It’s just been unique to get used to it, but you get your confidence up and then you start to take pitches and get more confidence. I’m working with their strengths and if I call a pitch, I have no problem with them shaking me off.”

And Cliburn and the organization only expect him to get better.

“For him to come in and do what he’s done here is a manager’s dream,” Cliburn said. “A lot of pitchers are doing what they’re doing because of the work he’s done in the bullpen. Those kinds of guys are hard to find and I’ll tell you we found a good one in that guy.” 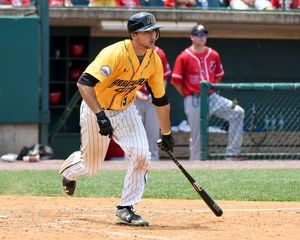