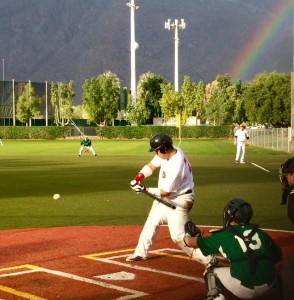 Takashi Miyoshi of the Palm Springs Power hits an RBI double against the Alberta Grizzly on January 20, 2017. Photo by Jack Coppinger.

PALM SPRINGS, CALIF – Day two of the CWL season saw a continuation of the rain from the previous day and all games at Palm Springs Stadium were cancelled due to wet weather and poor field conditions. On the Palm Springs Auxiliary Field, however, the day started earlier than anticipated to get in as much baseball as possible before the heavy rain set in.

Game one saw a matchup between the Palm Springs Power and the Alberta Grizzly. The Power got off to a fast start with a quick 1-0 lead when Curtis Gomez led off the game with a single and eventually scored on an error committed by Grizzly shortstop Mark Pisanello. The Grizzly came back to tie it in the bottom of the second when Matthew Benedetto drove in Ryan Caldwell with an RBI single. The Power got their lead right back when Takashi Miyoshi drove in Gomez to take a 2-1 lead. They scored a couple more insurance runs on three straight doubles by Gomez, Casey Fletcher, and Miyoshi. Alberta was able to mount a potential threat in the 5th when they loaded the bases with two outs, but Devin Clifford was called out on strikes to end the Grizzly threat. Palm Springs would score a couple more runs in the 5th and 6th innings and would come out victorious with a final score of 6-1.

Game two on the Auxiliary Field featured the New York Colonials and the Oregon Lumberjacks in a back-and-forth affair. Oregon struck first when Joe Daru, a late insertion into the lineup, brought in two on an RBI single in the bottom half of the second. The Colonials cut the lead in half the next inning with a run scoring on a sac fly off the bat of DJ Martinez. New York would then score two and take the lead in the top of the fourth when Giovann Texiera walked with the bases loaded and Daniel Arevalo hit one into the air for a sac fly. The Lumberjacks came right back in the bottom half of the inning and tied it up on a sac fly from Ryan Rinsky. This game looked to come down to the wire as it was knotted up at three entering the seventh inning, and then the Colonials’ bats came to life in final frame. The knockout blow came from New York third baseman Kalani Brackenridge who ripped a double to clear the bases and give his team a three-run lead. New York held down Oregon in the bottom half and would claim the game with a final score of 8-3.

With tomorrow’s forecast looking much more favorable, all teams will see action under blue skies. Palm Springs Stadium will have its first scheduled game at 10 a.m., featuring the Washington Blue Sox and the Manitoba North Stars. Game two will kick off at 12:30 p.m., with a matchup of the Palm Springs Power and the Toronto Rush. The final game will be at 2 p.m., and will be between the New York Colonials and the Coachella Valley Snowbirds.

At the Auxiliary Field, there will also be three games, with the first pitting the Palm Springs Power against the Alberta Grizzly at 8:30 a.m. First pitch for game two is scheduled for 10:30 a.m. and it will be a showdown between the New York Colonials and the Oregon Lumberjacks. The final game at the Auxiliary Field will start at 1 p.m. and will feature the Manitoba Northstars and the Coachella Valley Snowbirds.

Fans a reminder is Saturdays are dollar beer day at Palms Springs Stadium, so come out to the ballpark to enjoy cold Bud and Bud Light Draft for just $1 a beverage. 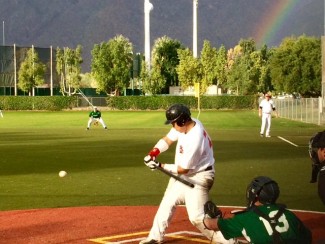 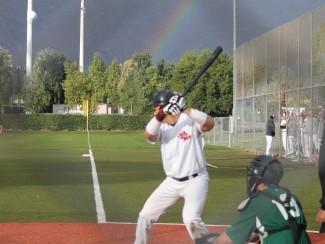