Griffith Makes History in the Desert on Rainy, Wild Day of Baseball

PALM SPRINGS, Calif. –– Day four of the California Winter League’s eighth season got off to an early start on Sunday, as all six scheduled games were moved forward in an attempt to avoid the inclement weather predicted for the afternoon.

The action got underway on the main diamond inside Palm Springs Stadium just after 8:00 a.m., with the British Columbia Bombers (1–1) taking on Hit King (0–2).

Devin Alexander got the start for the Bombers, hurling two no-hit innings while flashing an impressive curveball that helped him record a pair of strikeouts en route to earning the win.

Alexander was backed by his catcher Ricky Lipman, who turned around an 0-2, first inning offering from Hit King starter Tyler Garkow for a two-run home run over the left field wall.

Garkow would go on strikeout eight batters and allow four runs, just three earned, over his four innings of work.

In the fifth inning Hit King manager Cam Roth went to the bullpen, bringing in right hander Katie Griffith, who made history by becoming the first woman to appear in a California Winter League game. Griffith would record a pair of strikeouts and an unearned run in her lone inning of work.

Meanwhile the Bombers offense would continue to add on as the game continued, scoring in each of the fourth, fifth, sixth, and seventh innings as they earned the win by a final score of 7-4.

The day’s second ballgame, a matchup between the reigning champion Manitoba North Stars (0–3) and the New York Colonials (2–0), began with a bang in the top of the first as Manitoba first baseman Jordan Hill connected with a Terrence Moore fastball for solo home run to put his team up 1-0.

However the Colonials would answer right back in the bottom half of the inning, as a pair of North Star walks would come around to score on a RBI base knock by Kalani Brackenridge. But Manager John Harris’ ball club didn’t stop there, as in the bottom of the second, designated hitter Lance Montano launched himself a towering, two-run shot over the wall in left to extend the lead to 4-1.

The North Stars would rally late to cut into the lead, but were stymied as Colonials left hander Kyano Cummings shut the door in the seventh by striking out the side. By doing so, Cummings earned the save, preserving the 7-5 win for his ball club and securing the win for starter Terrence Moore, who himself struck out four batters in four innings of work.

The final game of the day on the main diamond, between the visiting Oregon Lumberjacks (1–1) and the host Coachella Valley Snowbirds (1–0) would be interrupted by rain prior to the third inning with ‘Jacks leading 1-0.

Ricky Schafer got the call for the Chill, dealing three strong innings, allowing one hit and one run, while striking out five batters to earn the win. Schaffer was matched pitch for pitch by counterpart, A’s starter Colton Spriggins, who fired three no-hit innings, allowing just a single unearned run. Spriggins would not factor into the decision.

Davis Strong was the offensive star of the ballgame, as he put together a two hit performance, including a single that drove home two runs as part of the Chill’s three run rally in the top of the fifth. Strong would finish the day with four RBI.

In the day’s second game on The Aux, the Alberta Grizzly (1–2) earned a 3-1 victory over the Toronto Rush (1–2) behind a complete game performance by James Ball. The Alberta starter relentlessly pounded the zone all day for the Grizz, consistently inducing weak contact, allowing him to shut down a potent Toronto offense despite striking out just two batters.

Ball’s lone blemish on the day came when Tanner Oymaian capitalized on a mistake to location by crushing a solo home run to put the Rush up 1-0 in the fourth inning.

Joshua McAdams would the answer for the Grizzly in the next frame, when he sent a 1-1 offering from JT Mickelson over the wall for a three-run homer to give his team the lead for good.

Tony Holton led the way for the offense, picking up two hits in three at bats, including a triple, while driving in four runs.

The California Winter League will continue tomorrow with two games scheduled on the Auxiliary Field at Palm Springs Stadium. The first game will feature the British Columbia Bombers and Palm Springs Chill at noon, and the second will be the between Hit King and the Canada A’s at 2:30 p.m.

Due to inclement weather all main diamond games have been cancelled. 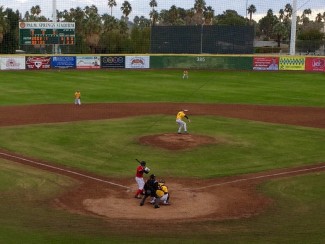