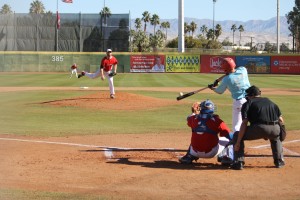 It was a wild day in the California Winter League as four out of the five games came down to the wire, while one other featured a dominant performance by the Canada A’s as their offense erupted for double-digit runs and their starter delivered a strong complete-game performance.

The Toronto Rush (5–2) used two rallies in the third, and fourth inning to hold on for the 4-3 victory against the New York Colonials (4–2) in the first game at Palm Springs Stadium.

The two-run fourth was the difference in the game for New York. Kevin Farley ignited the offense with a double. The next batter Lance VanNoy knocked him in with a triple, and VanNoy later scored on a sacrifice fly .

Fumitake Sakaguchi shut down the Colonials in the final two innings to earn the win for the Rush. He allowed only one hit and struck out two batters in those innings to earn his first win in the CWL this season.

The final game at the main stadium featured the Canada A’s (4–2) and the Manitoba NorthStars (1–6).

The A’s started off hot, scoring three to start the game thanks to a pair of RBI singles by Rudy Strnad and Scott Morton. Mike McClellan also delivered with an RBI triple in that inning. Two innings later, the A’s blew up for six to take a 9-0 lead, with one of the key hits being Alex Sawalson’s two-run triple. All told, Canada batters combined to hit nine extra-base hits.

The NorthStars could never quite get their bats going, in large part due to Colton Spriggins dominant performance. He earned the win and struck out five, allowing just one run, which scored in the final inning. The A’s run away with it in this one, final score 13-1 in six innings.

Game one at the Palm Springs Auxiliary field saw Ozzy Braff lead the Oregon Lumberjacks (3–3) to a 4-3 victory over the Cochella Valley Snowbirds (2–4). Braff went 2-for-4 with a single, double, and two batted in.

Braff got the offense started for Oregon with a double in the bottom of the first to get the Lumberjacks on the board. The Snowbirds briefly took the lead in the top of the fifth but the advantage did not last long. Braff singled in the sixth knocking in the deciding run of the game.

Michael Eagan earned his first win of the season. Eagan allowed two runs in four innings of work. d’Aundray Van Slyke closed the game in the seventh by striking out the side to earn his first save of the season.

Game two at the Auxiliary Field matched up the British Columbia Bombers (3–2) and the Palm Springs Power (5–1).

Martin Windisch got the start on the mound for the Power and he held the Bombers scoreless in his three innings of work, striking out five. For the Bombers, starter Mark Burnside and reliever Travis Johnston each went two innings, allowing one combined hit and keeping the Power off the board.

Palm Springs broke through in the bottom of the fifth on Brandon Oliver’s two-run double to give them a 2-0 lead. The Power got two more in the next inning on back-to-back RBI doubles by Daniel Moro and Christopher Burks.

The Bombers got two back on doubles by Thomas McGuckin and Jonathan Collins in the top of the seventh. They would bring the tying run to the plate in the inning, but reliever Cody Beck got the groundout to the second basemen to end the threat and secure the win. Windisch got his second win of the season in his team’s 4-2 win.

The third and final matchup on the Auxiliary Field was between the Alberta Grizzly (1–6) and the Washington Blue Sox (2–4) and ended up being a pitcher’s duel.

Yujo Kitagata for the Blue Sox went three scoreless innings, striking out three and allowing just one hit. On the flipside, Ryan Bereznak, starter for the Grizzly went three-up, three-down in his only inning of work.

Riku Suzuki came in the second for Alberta and was fairly effective in his four innings, giving up just one run, a HR to Blair Beck, but that would be all the Blue Sox would need as they would win the game with a final score of 1-0. Chance Hicks, who pitched four shutout innings in relief, struck out five, earning the win.

There are two games scheduled tomorrow at Palm Springs Stadium. First pitch for game one is at 10 a.m. and features the British Columbia Bombers and the Palm Springs Chill. Game two will follow at 12:30 p.m. and will pit the Manitoba NorthStars up against the Palm Springs Power.

At Palm Springs Auxiliary Field, the first game is scheduled for 8:30 a.m. and features the Washington Blue Sox and the New York Colonials. Game two will have a matchup between the Oregon Lumberjacks and Hit King. First pitch is 11 a.m. The final game at the Auxiliary Field will be at 1:30 p.m. and the Toronto Rush will be going up against the Coachella Valley Snowbirds.

Don’t forget fans that tomorrow is $1 Beer Day! Bud and Bud Lite draft beers are all available for just $1. 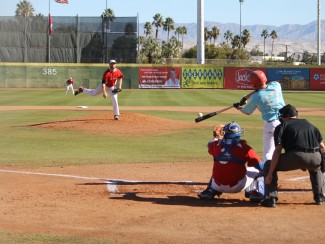