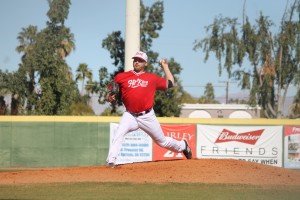 Luce Walks-Off Chill in Another Fun-Filled Day of Baseball

Yet another sun-soaked day in Palm Springs and there was plenty of exciting baseball. There were a couple of walk-off victories for CWL teams as well as a good ol’ fashioned pitcher’s duel.

In the first matchup of the morning at Palm Springs Stadium, the Hit King (4–3) defeated the Alberta Grizzly (1–6) 2-1 in a game that was dominated by pitching.

The Grizzly jumped out front early with a solo home run by Ryan Budnick in the second inning. Alberta would not be able to muster much of anything else offensively as they only had one hit, and three total base runners the rest of the way.

Tyler Garkow turned in a dominant performance on the hill to pick up the victory. The Glendora, California native struck out nine batters in five innings allowing only one run. Garkow retired 10 in a row in one stretch from the end of the second to the fifth.

Jarret Martin picked up the six out save for the Hit King in two clean innings of work. Martin struck out the side in the sixth, and only allowed one base runner in two innings.

Game two at the main field matched up the Palm Springs Chill (5–2) with the Coachella Valley Snowbirds (2–6).

The Snowbirds had it looking like a blowout early, thanks in part to Jonathan Crank’s grand slam that gave his team a 5-0 lead in the second. The Chill came right back and scored three on a couple of base hits by Quintin Alexander and Clinton Perez to cut the lead to 5-3.

The Snowbirds, looking to snap a five-game losing streak entered the seventh with a 6-4 lead, but the first three batters reached for the Chill in the bottom of the inning to make it 6-5.

Jake Luce then came to the plate with two runners on base, taking a 2-0 fastball and smashing it over the right-field wall to deliver the Chill a win in walk-off fashion. Final score in this one was 8-6 and reliever Jose Flores was awarded the win for Palm Springs.

The first game over at the Palm Springs Auxiliary Field featured the British Columbia Bombers (3–4) and the Oregon Lumberjacks (5–3).

It was scoreless through the first three innings until Louis Johnson homered to give the Bombers the 1-0 lead. They would score one more the next inning on a Ricky Lipman RBI single to increase the lead to 2-0.

The Lumberjacks came back in the bottom of the fifth when LaTavius Shelby hit a two-run dinger to knot the score at two.

The score stood until the bottom of the seventh when Nathan Suyematsu hit an infield single to score Joseph Daru as Oregon walked-off with a 3-2 win. Joshua Falbo, who had a scoreless top of the inning, earned the win for the Lumberjacks.

CJ Bahn performed exceptionally on the mound and earned the win as the starter.  Bahn pitched four solid innings allowing only one run while striking out nine to support his offense.

The Palm Spring Power (7–1) continued on their dominant run of the California Winter League in their 8-6 win over the Washington Blue Sox (2–6).

The Power overcame an early four-run deficit by rallying for four runs of their own in the fourth inning. The big hit in the inning was a Christopher Burks double that scored two. The Power scored all eight of their runs in three innings.

Cody Beck closed things out in the seventh by striking out the side to preserve the victory.

The first game at Palm Springs Stadium has a scheduled first pitch at 10 a.m. where the Coachella Valley Snowbirds will be taking on the Alberta Grizzly. Game two will feature the Oregon Lumberjacks and the Washington Blue Sox. First pitch is at 12:30 p.m.

Palm Springs Auxiliary Field has three scheduled games tomorrow, with the first being Hit King matching up against the Toronto Rush. That game will start at 8:30 a.m. The second game is scheduled for 11 a.m. and will pit the Palm Springs Chill against the Manitoba NorthStars. The final game will feature the New York Colonials and the Canada A’s and first pitch is scheduled for 1:30 p.m.

Don’t forget fans that tomorrow is Locals Day! Any local fan with a Coachella Valley ID will get in for just $2. 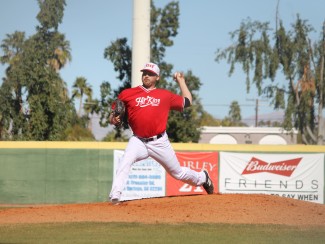