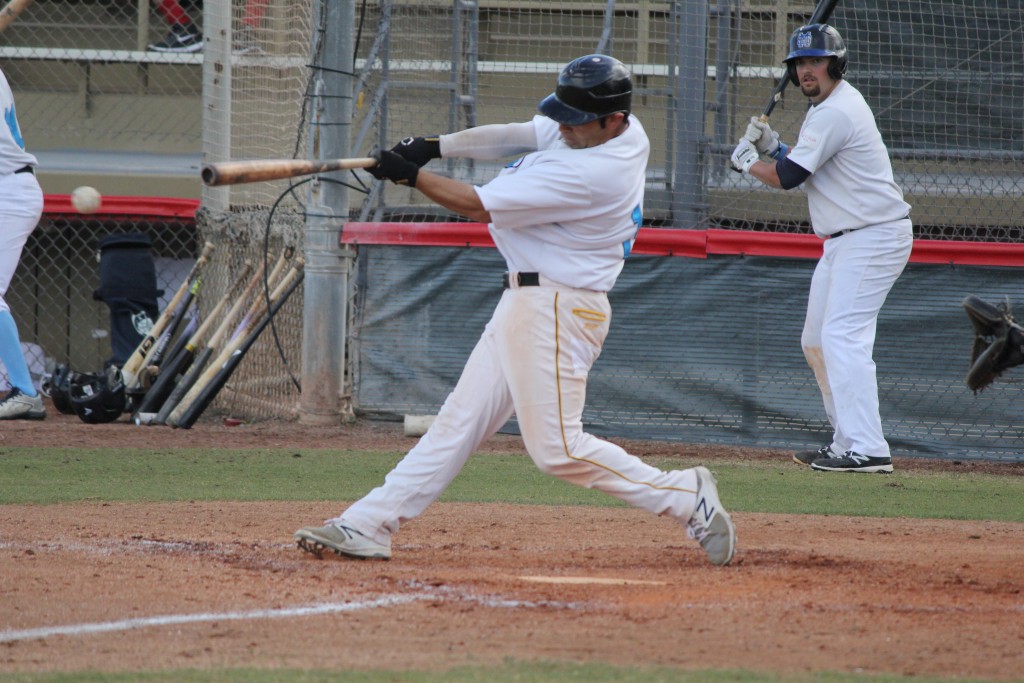 The first two rounds of California Winter League Playoffs had gone to plan with the top four seeds of the playoffs advancing to the semi-finals Saturday at Palm Springs Stadium. However, that would change as the top seed in the playoff was taken down.

The fourth-seeded New York Colonials held on against the top-seeded Palm Springs Power by a score of 9-6. They used an early offensive ambush and solid bullpen work to get the job done to move on to the Championship game of the California Winter League season.

New York struck for a five-run rally in the top half of the first to take the early momentum. John Giakas and Ryan Gyrion both doubled in runs in the inning as the the Colonials batted around. Kalani Brackenridge also singled in two runs in the inning.

The Power responded in the bottom of the second with a four-run rally to tie the game at 5-5. Nicholas Buckner lead off the inning with a solo blast to center. Brandon Oliver doubled in the inning as the Power would bring ten batters to the plate.

Both teams tacked on one run and it would remained tied until the seventh inning. The Colonials were able to rally for three runs to grab the lead for good in the top of the frame. Giakas would double home the lead run and they would add two more runs on an RBI single by Edgar Lebron Jr. and a sacrifice fly off the bat of Brackenridge.

Closer Kyano Cummings shut the door in the bottom of the seventh to preserve the victory. The Colonials would pull of the upset, becoming the first team to do so in this year’s playoffs.

The second-seeded Palm Springs Chill held serve in their 7-0 victory over the third-seeded Toronto Rush. The Chill held a small lead at 2-0 going into the fifth, but the Chill blew the game open in the inning with a five-run rally.

Jake Luce got the scoring going with a sacrifice fly and Davis Strong followed with an RBI single. Clinton Perez delivered the big blow in the inning with a two-out, two-run double to give the Chill a 7-0 lead. All told, ten batters would come to the plate and six base-runners reached base and that would be more than enough for starting pitcher Myles Richard.

Richard would go the distance for Palm Springs in a complete game gem. He allowed only four hits and a walk in seven innings of work to earn the victory. Richard retired 12 of the last 13 batters he faced to exterminate any chance the Rush may have had to make a comeback.

The fourth-seeded New York Colonials will take on the second-seeded Palm Springs Chill in California Winter League Championship game. It will be the first time that the two teams have faced each other during the CWL season. First pitch at Palm Springs Stadium is scheduled for noon and tickets will be available at the box office prior to first pitch. For more information visit californiawinterleague.com.