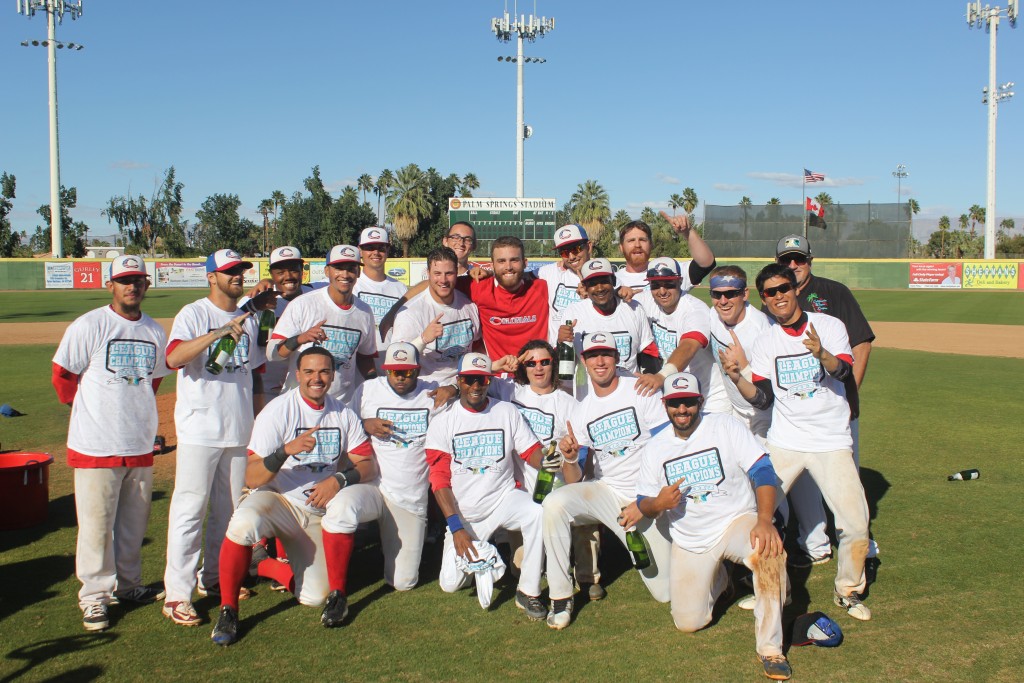 PALM SPRINGS, Calif. –– The eighth season of the California Winter League came to an exciting conclusion on Sunday, as the fourth-seeded New York Colonials (12–6) pulled off an upset victory over the second-seeded Palm Springs Chill (13–4) to secure their first CWL Championship by a score of 10-3.

On paper it appeared that the advantage lay on the side of the Chill, who had won their Semi-Final game against the Toronto Rush without stressing their bullpen thanks to a complete game effort by Myles Richard. Meanwhile the Colonials had been forced to lean hard on their bullpen in their Semi-Final matchup with the Palm Springs Power, and it was likely that several key arms –including hard-throwing lefty Jarrett Martin– would be unavailable for the Championship Final.

However once the game got underway this proved to be a poor assumption, as the Colonial offense jumped all over the Chill to plate four runs in the game’s first half inning.

Yusuke Fujiki led off the frame by working a seven pitch walk, advanced to second on a base hit by DJ Martinez, and then scored the game’s first run on a single by John Giakas. Edgar Lebron Jr. then laced a two-run triple, before being driven home on an infield single by Kalani Brackenridge, making the score 4-0 after one.

The Colonials would add an additional five runs in the second inning to make it 9-0, thanks again to hits from Giakas and Lebron Jr. –who finished the day three-for-four with two runs scored, and two-for-four with four runs batted in, respectively– before scratching across an additional run in the eighth inning.

This offensive outburst would prove to be more than Colonial starter Dylan Thompson would need, as he put to bed any fears regarding the vulnerability of the New York pitching staff by hurling six standout innings, while striking out five batters and allowing just a single earned run to earn the victory.

John Harris sent Zach Kronick to the mound in relief of Thompson to begin the seventh inning, before turning to his closer Kyano Cummings –who appeared in all three Colonial playoff games– to get the ballgame’s finals six outs. Cummings did allow a base hit to Casey Fletcher in the eighth, but shut the door in that frame, and induced a soft ground ball to Bud Morton at second base to end the ballgame in the ninth.

Dakota Freese hurled three scoreless innings in relief while recording five strikeouts for the Chill, whose bullpen managed hold the Colonial offense to just a single run after the second inning.

Blair Beck led the way offensively for Palm Springs by lacing a pair of doubles in four plate appearances, but his efforts would not prove to be enough to help his team climb back into the ballgame.

Click here to view the Full Box Score for the CWL Championship Game.