PALM SPRINGS, Calif. – The Washington Blue Sox kicked off the 2018 California Winter League
season with a 5-4 win over the Palm Springs Chill at Palm Springs Stadium on Thursday. Blue
Sox’ starter Joseph Costello highlighted opening day, as the right-handed pitcher did not
allow a run over five scoreless innings of work.

Costello struck out nine Chill (0-1) in the win. Offensively, the Blue Sox (1-0) got on the scoreboard
first.

In the second inning, Michael Ehrhard launched a solo home run to left field to give Washington
an early 1-0 lead. The Blue Sox added on in the third, as Cody Den Beste tripled and later scored
on an RBI ground ball by KC Huth.

Huth eventually scored on a Scott Stetson RBI double, and Carson Lee drove in Stetson on a
sacrifice fly to make it 4-0.

Former Colorado Rockies starter Tyler Matzek entered the game in the fourth inning for the
Chill and slowed down the hot Washington offense. Matzek retired all six men he faced in
order.

After Zach Compton scored an insurance run in the top of the seventh to increase the lead to 5-
0, the Chill made things interesting in their final at-bats.

Jacob Barbee, Ryan Smith and Rock Smith all reached in front of Ryan Weston, who singled
home a run to decrease the deficit to 5-1. Then, with the bases loaded, Cody Castro drove in
three RBIs on a base-hit to right field to make the score 5-4.

Donnie Speranza (0-1) took the loss for the Chill, while Costello (1-0) got the win.
Game 2 featured the Palm Springs Power and Oregon Lumberjacks. The Power jumped out to
a 3-0 lead after the first inning thanks to the top three men in their order all reaching base and
coming around to score.

Third baseman Taylor Grace got the scoring started with an RBI single.  Lumberjacks starter
Sam Burton made it through just one inning, allowing three earned runs, and took the loss.

The Power added two more runs in the third inning by way of sloppy defense, as the Jacks
made two errors in the field, both with two outs.

Power starter Kyle Brown fired three strong no-hit innings before turning it over to the bullpen.
Brown finished the day with three strikeouts and picked up the win.

With Palm Springs leading 5-0 in the fifth inning, pinch-hitter Chris Johnson came up with the
bases loaded and delivered a bases-clearing single to left field off Noe Arteaga. But that was as
close as the game would get.

The Power got one back in the fifth to make it a 6-3 game, before tacking on three more in the
sixth. Two of those runs came on a John Hale single to right field.

Left-hander Christian Colletti worked the final two innings of the game for the Power, shutting
the door down with three strikeouts. Casey Dill’s squad finished the day with seven hits,
defeating the Lumberjacks, 9-3.

Chill Use Four Pitchers to Combine for a No-Hitter 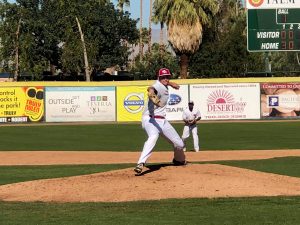