Chill Use Four Pitchers to Combine for a No-Hitter 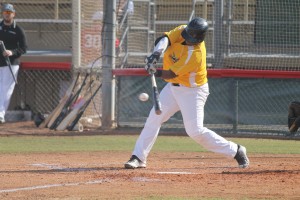 Jeremy Jacobs started for British Columbia and struggled early. With one out, Will Krug singled. Krug then stole second base, advanced to third on a passed ball and ultimately scored on a wild throw from Bombers catcher Stephen Valdez.

Later in the inning, Kash Mattson scored after David Kerian walked with the bases loaded to increase Manitoba’s lead to 2-0. Jacobs would settle in from there, as the left-hander retired the final seven of eight hitters he faced.

The Bombers got going offensively in the fourth. Matthew Bendetto singled home Cameron Coons to cut the deficit to two. Bendetto and Christopher Scalisi, who reached on a base-hit, would eventually score in the inning after a wild throw sailed into left field to make the score 3-2, British Columbia.

The Bombers piled on in the sixth. They sent 10 men to the plate and four scored on six walks, one hit and a hit-by-pitch. Manitoba made it interesting in the seventh. Dylon Rodman scored on an Alex Liquori RBI groundout. However, the North Stars stranded runners on second and third to end the contest.

Matt Yelovich of the Bombers got the win after compiling five strikeouts in three shutout innings in relief. Jensen Kirch was tacked with the loss for Manitoba.

The second game of the day between the Alberta Grizzly and Canada A’s featured a little bit of everything, with the two clubs combining for 21 runs and 17 hits.

It had the feel of a slugfest from the start, as it was 3-1 after the first inning, in favor of the A’s. The Grizzly jumped back in front shortly after with three runs in the third, which included a Gabriel Gunter RBI single and a Justin Gil RBI double. The Grizzly added five more runs in the fourth thanks to two errors and a couple passed balls in the field from the A’s. In the inning, Chuck Terron drove in two runs with a double.

With the Grizzly leading 9-3 after four frames, the A’s began to mount a comeback. Canada scratched across three in the fifth inning and four in the sixth, capped off by Michael Marlin’s RBI double to left field, which put the A’s ahead 10-9 heading into the seventh.

Down to their final out, the Grizzly tied the game at 10 on an error in the top of the seventh, but the A’s struck back in the bottom of the inning. James Stea tripled to deep left-center field to lead off the inning, and scored on a wild pitch, giving the A’s a walkoff win, 11-10, over the Grizzly.

Clayton Dostal got the win for the A’s, while Tom Sigrist suffered the loss for the Grizzly.

On the auxiliary field, four pitchers from the Palm Springs Chill combined for a no hitter en route to their 8-0 win over the Oregon Lumber Jacks.

I had chance to two of the winning pitchers Brandon Warner (25) “It feels great,” Warner said. “We got off to a rough start yesterday. Today was a lot better, we just had fun today.”

Join us Saturday, January 27th for “Suds on Saturday.” Beer served at the concessions will be sold for $2. Listen live to the broadcast beginning at 10:00am on CaliforniaWinterLeague.com.