Entering his fourth season with the CWL, Noce comes with 35 seasons of baseball experience.  Paul had two stints in Major League Baseball with the Chicago Cubs and the Cincinnati Reds, as a utility infielder. After he stepped away from the diamond as a player, Noce found himself on the coaching and support staff for a few MLB organizations and collegiate teams. During his tenure at Hillsdale College in Adrian, Michigan, Noce notched 349 wins. He also holds a championship title at the AAA level in 1988, as well as a World Series title with the 1990 Cincinnati Reds. In 2012, Noce was inducted into the Peninsula Sports Hall of Fame, in San Mateo, California.

Since his inaugural season as a manager in the California Winter League in 2017, Paul Noce has signed over 20 CWL players, many of who have gone on to play in affiliated minor league baseball as well as other high level independent leagues. Noce has found success in the USPBL by signing both rookies and experienced players from the CWL in each of the last three seasons.

In 2019, Noce signed Noah Gotsis out of the CWL as a promising right handed pitcher. The 23 year old went on to represent the East Side Diamond Hoppers in the USPBL All-Star Game before receiving the call from the Colorado Rockies on August 9 to join their organization. Gotsis became the sixth USPBL player to ink an affiliated deal in 2019. Gotsis finished his season as a member of Grand Junction in the Pioneer League after beginning his season in the California Winter League.

Tanner Kiest, a right –handed pitcher out of Riverside, California got his call from the Minnesota Twins after signing with Noce following a dominant performance in the 2018 CWL. Kiest was the fourth player under Noce’s guidance to sign with an affiliated club that season.

Paul Noce has been at the helm of the Diamond Hoppers since their inception three seasons ago. It can be said his teams are always at the top in all offensive categories. In 2018, he led the Diamond Hoppers to their first ever championship. In his career with the USPBL, he has mentored seven players who have signed with Major League Organizations.  The California Winter League is excited to welcome back Paul Noce for the 2020 season.

The goal of the California Winter League is to get players signed to professional contracts before spring training begins as well as help each athlete develop before they report to their professional teams. Players work directly with Major League Baseball scouts and independent league managers for a month in Palm Springs, CA. Over the last 10 years, the CWL has seen over 700 professional contracts offered to its players. Whether you are a professional player looking to get a jump on the competition before reporting to spring training or you are right out of college and looking to jump start your professional career, the CWL will help you GET BETTER AND GET SIGNED!

Can-Am League Merges Into Frontier League, More Opportunities than Ever for CWL Players 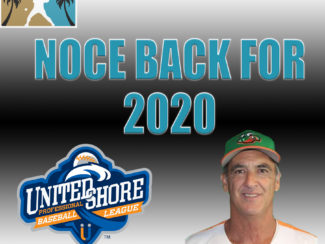