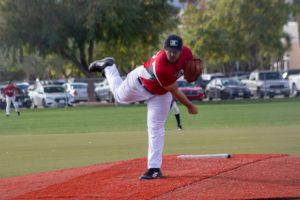 Grizzly Walk Off On Power

In Sunday’s only game on the Auxiliary Field, Champ Davison hit a walk-off two-run home run to lift the Alberta Grizzly to a 6-4 win over the Palm Springs Power. The Power led the game 4-3 after five, but in the sixth, Kameron Sorensen hit a game tying RBI double for the Grizzly. Malcolm Grady struck out six over three innings on the mound for the Grizzly. Colin Gregory, Purnell Chaplin, and Champ Davison all had RBI for Alberta. For the Power, Landen Barns finished the day 3-for-4 with three RBI.

A’s Complete Comeback to Walk-Off on the Lumberjacks

The first game of the day at Palm Springs Stadium pitted the Oregon Lumberjacks against the Canada A’s. Both teams scored in their respective opening half innings to open the scoring at one run apiece. The visiting Lumberjacks broke the deadlock with four runs in the top of the 3rd to make the score 5-1 before the A’s countered with a run of their own in the bottom half, cutting the deficit to 5-2. After a scoreless top of the 4th, the A’s cut into the deficit once again and added two runs making the score 5-4. That is how the score held until the bottom of the 7th when the A’s scored two runs to take the win in walk-off fashion 6-5 over the Lumberjacks.

The second game of the day at Palm Springs Stadium saw the Washington Blue Sox face the Palm Springs Chill. The Blue Sox jumped out to the early 1-0 lead in the top of the 1st inning. The lead would not last long as the Chill countered with three runs of their own in the bottom half of the opening frame making the score 3-1 thanks to a Peyton Isaacson 2-run homerun. After a scoreless second, the Chill added two more runs in the bottom of the 3rd to make the score 5-1 thanks to a 2-run homerun by Tristan Graham. Another scoreless inning would follow in the 4th before the Chill notched two more runs in the bottom of the 5th bringing the score to 7-1. The Chill added one more in the bottom of the 6th earning the victory 8-1 over the Blue Sox. 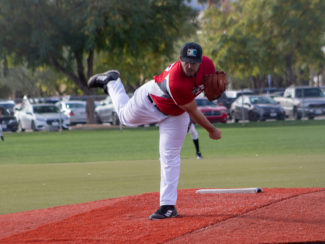